A Hell Of A Potter 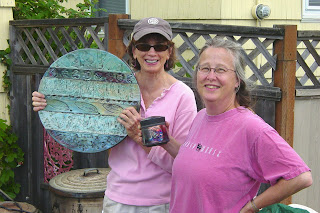 When I met my friend Peg Johnson thirty years ago, people were calling her Peggy Pooh-Potter. Before that, she went by Morningstar. So Peg is her grown-up name. In another ten years or so, she’ll have evolved to Mistress Margaret, Princess of Pots.

Peg has made her living at various times as a potter, including now. Now she’s into Raku. It’s a solitary art, but there are a few odd steps in the making of Raku that go a lot easier if there’s a helper. I volunteered to help, inasmuch as I’m five minutes away and interruptible. I was assured that she just needed more hands on deck, that the whole helping operation would take about five or ten minutes and would not be a big deal; just a matter of putting garbage can lids on garbage cans and tossing a few wet towels around, and I’ve done both of those things before. In fact, I like to think I’m right at the head of the pack for wet-towel-tossing. The main point was to be there at the moment one is needed. I arrived full of confidence in my abilities, because if there’s one thing I can do well, it’s show up.

So I get there, and it turns out there’s an outfit. There’s a bright silver asbestos apron, there are welder’s gloves, there’s a freakin’ gas mask, and it occurs to me, as Peg points out the nearby garden hose “in case things get out of hand,” that there’s more to this operation than just showing up. But time was of the essence, and there was no time for chit-chat. Peg and I lifted the top off the kiln and set it aside, and Peg grabbed some enormous tongs and pulled out her ceramic pieces, placing them one by one into an array of garbage cans filled with shredded paper, and that’s when all Hell broke loose.

Literally. Fire, brimstone, smoke, acrid odor and the screams of the wretched. The screams were coming from me, I’m told, and I can’t discount that as a possibility. I get jumpy. This is why I don’t believe in Heaven and Hell. It’s just one more scenario in which I’ve got a feeling I won’t come out well, so I’d rather abstain. On the other hand, if I’ve missed my guess about this, helping Peg with the Raku is probably going to be good conditioning for me, ultimately.

Still, I’m not that into fire. I grew up outside of Washington, D.C., and I’ve sought out cool temperatures ever since. As a kid, I didn’t give much thought to my future livelihood, but I knew I didn’t want to do anything where I was likely to be shot at, or set aflame. Postal work really came pretty close to meeting all my requirements. Oh, sure, there was that time Herbie’s Jeep blew up and he ran around in circles screaming “CALL NINE-ELEVEN! CALL NINE-ELEVEN!” and everything went to ashes while people looked for the “eleven” button on their phones. But that’s just Herbie, and really, you take enough letter carriers and turn them loose for enough years, one of them is going to set himself on fire. That’s just the way it is. As for the business of not getting shot at, the trick is to be a little scarier than the person who might want to shoot you, and with the postal uniform and a slightly unhinged demeanor, you’re halfway there.

So here I was, tasked 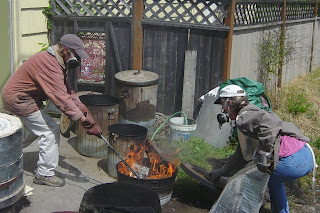 with the job of putting the lids on the garbage cans, which were roaring fire up to the skies, and tossing the wet towels over them, and whereas I do not pretend I did such a good job, I’m pretty sure I’ll be better next time. I’ll show a little more confidence, and maybe, per Peg’s excellent suggestion, I won’t fling the lids towards the cans like Frisbees and hope for a good seal. “This is why not many people do Raku,” Peg kindly explained in a nasal bleat through the gas mask.

But here’s why people do. You get this gorgeous stuff, the more wonderful because there’s no particular predicting what is going to come out of those cans. [You can see Peg Johnson’s splendid work at the Portland Saturday Market.] Postal work is more placid, but the best you can do is finish up on a given day and then have it all to do over again the next morning. So it’s like doing the dishes.

And by the time I’ve done this Raku business a few more times, I’ll have gotten a little more accustomed to the weather in Hell. When the time comes, I’ll be better able to cope. As long as it’s not humid.