We didn’t talk about Hell at Resurrection Lutheran, so I had to hear about it from the neighbor girl, who was being raised Baptist and also had information about where babies came from. I didn’t pay much attention to the Hell business. All that poking and flames and stuff was way too personal and required way too much imagining of physical distress and we Lutherans didn’t like to think about anything that could happen to you without your clothes on.

I had to get my morality tales elsewhere, too, and they didn’t do much for me. Oh, you know the ones: in Hell, a sumptuous banquet is served to the residents at a long table and everyone’s fork is too long to reach their mouths, so they suffer and starve. In Heaven, same banquet, only everyone feeds each other across the table. Nothing about this holds up. Why couldn’t they hold their forks closer to the tines, or use their fingers? That’s what I would have done. 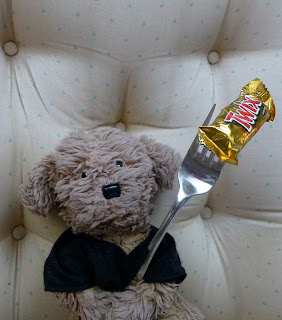 Or there’s this one, designed to instill a proper appreciation for the risks of signing up with the wrong team in life: a boulder the size of a house is visited by a dove, who scrapes her beak against it once every thousand years; and when the boulder is worn down to nothing, a single day in Eternity has passed. Even when I was eight, this one didn’t feel right. I mean, if there is a certain amount of time that can pass, no matter how long, and can be called a “day,” it sort of devalues the whole eternity concept. I mean, if it has “days,” they could conceivably run out at some point. Being numbered, and all.

I think I might have tried to wrap my head around the idea of eternity for a little while because it seemed important or required or deliciously frightening. But after a bit the only thing that became clear was that it was not possible to imagine eternity, and so I quit trying. It’s a form of laziness, I suppose, but I’ve always had a pretty good grasp of when to work hard for a solution and when to bail. You can’t even interest me in a conversation about eternity. Instead I try to keep good track of the present, an activity that looks pretty day-dreamy from a distance and which gets easier and easier as I lose my memory. This also means I don’t worry too much. I do worry, but only for so long, and then the whole fret structure just breaks down. So naturally I don’t believe in Hell, either.

Until now. Now I read there’s a dude what bought 45 acres of limestone caves in Kansas and he’s setting it up as a combination resort and end-times sanctuary. For a price–a fine high one–you can buy a slot inside his cave for your RV where you can ride out your natural lifetime in case of asteroid strike or terrorist attack or nuclear bomb, and prepare to blast away anyone who tries to get in without paying for his parking space. Even before the asteroid hits, you can take a vacation in there and learn all about survival skills, which will certainly involve bad food and shooting. And come the big event, you can move in for good and spend the rest of your days in a plastic lawn chair in an RV park with no sunshine next to a bunch of survivalists and their sullen teenagers and someone with yellow hair will be wearing Crocs and stretch Capris and playing Stevie Nicks and the Eagles on a hand-cranked device and if that isn’t Hell, I don’t know what is.