The Hinges Of Hades 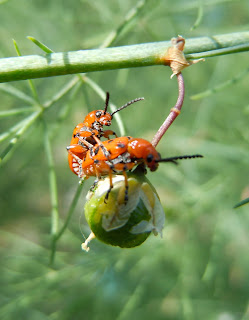 It’s hot. It’s so hot I could accessorize with pepperoni slices. It’s a hundred and fifty degrees in Portland, Oregon, give or take, and that’s just not fair. That would be like going to Disneyland, the happiest place on earth, and Mickey Mouse up and gives you a wedgie. It should never happen. It makes me cranky and miserable and also reminds me of asparagus beetles.

Asparagus beetles live only on asparagus plants. They don’t have a Plan B. Their function is to take divots out of your fresh asparagus spears. There might be something in it for them, too, I don’t know. A long time ago, we had what was probably the only asparagus patch in a couple square miles. It stood tall and proud, waving its feathery fronds, until the first asparagus beetle showed up, followed by a squadron. How did they locate our little asparagus patch? They followed a gradient of asparagus-fume molecules. They found one molecule, then happened onto a direction with a few more, and kept moving towards the areas of greater asparagus fumelet concentration until they were smack into Divot City. Same gradient concept applies to flies on poop. Don’t ask me why moths find porch lights. I think that’s just a lack of personal brightness. 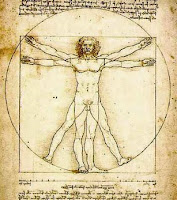 When I was a child, I did the same thing, following a temperature gradient. I grew up in Arlington, Virginia, where Satan sends the people who are acting up. We could only play in the sprinkler for so long, and then we pitched over in the shade until the chiggers drove us out, when we slithered into the house on a slime trail of unevaporated sweat, and ultimately prostrated ourselves on the kitchen linoleum in front of a black oscillating fan, arms and legs positioned as far away from each other as possible. This would be the last time anything I did reminded anyone of Leonardo da Vinci. We lay sullen and miserable, our tissues softening like carrots in a saucepan. 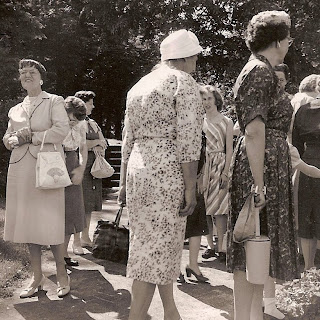 Mrs. Tangerose was the first person we knew who bought an air conditioner. A whole group of the church ladies walked over to her house to see, and I tagged along. The house felt like ours except for one room, and we walked in and suddenly it was January in the Yukon, our sweat iced over, and we had never been happier in our lives. That room air conditioner did a lot to bolster my belief in God, until we had to leave.
Our plan at home was different. The house was closed up with the shades drawn all day, and then in the evening Daddy would obsessively check the thermometers until the moment when the inside temperature was 90 and the outside was only 89, and then the windows were flung open and the creaky window box fan upstairs was turned on, pointing out. Ahh! By morning we were comfortably down to 86 or so and the house was shut up again, while Daddy went off to work in an air-conditioned office. 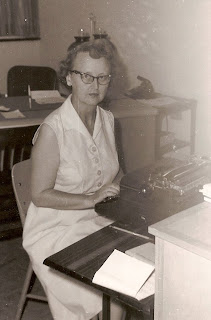 Mom was not the complaining sort, but somewhere in the mid-sixties she expressed some interest in a new-fangled central air conditioning system. Daddy stoutly maintained that going from an air-conditioned office to an air-conditioned bus to an air-conditioned house was not good for you. At moments like that, I tended to consider mine a miracle birth.
Women’s lib came along and dropped some ideas in Mom’s head and one day she took her flawless grammar and spelling and 135 wpm typing skills and got herself a part-time job, and just like that we had central air, just in time for me to leave home. I grew up and headed north, then west, following a temperature gradient, and that’s how I ended up in mossy Oregon with the asparagus beetles. Where global warming is fixing to give us a giant wedgie.
By Murr Brewster|2021-11-09T21:26:57-08:00August 14, 2010|Uncategorized|24 Comments