So the Good Star Betelgeuse might be on the way out. One thing is guaranteed, humans being what they are (gullible, imaginative, and self-centered in the extreme): if Betelgeuse goes ahead and dies on us in a fiery explosion, a lot of people aren’t going to be content to admire it for the awesome spectacle it is, but will impute all sorts of significance to it. It will be a sign of something: impending doom, God’s Moral Flashlight, anything but the collapse of a massive star that has about run out of fuel and can no longer overcome the force of gravity. Nope: people already believe that their lives are disrupted whenever a planet looks like it’s going backwards but isn’t. They’re not going to let a supernova go by without wringing as much meaning out of it as they can.

For instance, there’s quite a lot of speculation that the Star of Bethlehem that led the three wise men to Jesus’s bed of straw was actually a supernova. Now, right off the bat you have that problem with witness reliability: Matthew was the only Gospel writer who even mentioned a big star, which you’d think one of the others would have noticed. Especially if it was moving around the sky and pulling up short and parking right over the baby.

But evidently there was a doozy of a nova on February 23, 4BC. And some scholars, based on various things known about King Herod, put Jesus’s birth at anywhere between two and six years before his birthdate, which is a good trick all by itself, but maybe not a problem for the divine.

We can’t take everything the Gospel writers said to the bank. They don’t agree with each other. Everyone has the blessed event taking place in Bethlehem, which concords with an earlier prophesy, but some have Joseph and Mary and the babe hieing off to Egypt and others have them right back in Nazareth, having only popped off to Bethlehem for the census.

(Think about that for a moment. We get all upset when someone bangs on our door for the census, or we have to fill out and mail a form. Imagine how a modern person would feel about making a road trip for the purpose. On a donkey. Pregnant.) 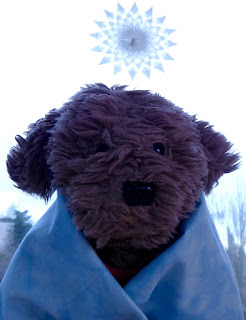 Anyway if it was that particular nova, once again, we’re dealing with something that actually took place 21,000 years earlier, so if it really was announcing the birth of the Savior of Mankind, that was some slick planning. The only thing we know of that was happening around then was that people were moving to the vicinity of Canberra, Australia. And generally speaking it isn’t mankind that needs to be saved when people start occupying territory, it’s the animals that already lived there. Nevertheless, the whole coincidence–star blowing up, baby born 21,000 years later, mankind redeemed–is considered by some to be a mystical slam dunk, because God.

Now if good old Betelgeuse were to collapse this year, it really would’ve happened in about the time Peter the First of Portugal was born. Peter was in love with his wife’s maid and his own father hired men to decapitate her; he had her dug up again, but nobody is reported to have sailed into the sky or anything, and he had to settle for matching tombs so that at least they could be together at the Last Judgment.

To be fair, lots of supernovas haven’t panned out, Messiah-wise.

But let’s stick to the convention that the significant event is the arrival of the light from the explosion to our planet. In that case, if Betelgeuse goes off now, we should start looking around for a new savior, and it’s none too soon. I would’ve put my money on Greta Thunberg, but I guess it’s too late.