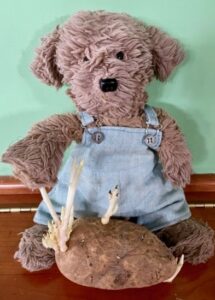 Every state has its reputation. It’s not necessarily deserved. In West Virginia, no one wears shoes! Ha ha! In Montana, men are men and sheep are nervous! Ha ha! None of it’s true, of course. Sheep barely notice little man-peckers. And any number of West Virginians own footwear. I’ve seen ‘em. What West Virginia is really known for is the greatest salamander diversity on the planet. Or should be.

But there are legitimate differences. Californians really do wear hemp face masks. Oregonians knit theirs out of moss. Floridians’ face masks are made of liberals’ hopes and wishes.

And sometimes the differences become clear in legislation.

In the same week in March, the governors of Washington and Idaho each signed important legislation addressing their most vexing problems. Governor Inslee of Washington signed a transportation revenue bill directly addressing what he considers our most urgent issue, climate change. It provides for a number of projects including the electrification of ferries, new walking and biking corridors, replacement of fish culverts, and free public transportation for children up to age 18, and pays for it in part by a cap-and-trade carbon pricing program for the state’s largest emitters of greenhouse gases. 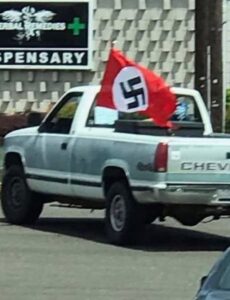 Not to be out-governated, Brad Little of Idaho slapped his John Hangcock on a shiny new anti-abortion bill, correctly surmising the greatest threat to the state is the net loss of tiny Aryan babies. His bill allows people to sue medical professionals who perform abortions after the point certain fetal tissues begin to quiver, or about two weeks after a woman realizes she’s uh-oh missed her period. The bill awards no less than $20,000 to the mother, father, grandparents, siblings, aunt or uncle of the unrealized fetus or embryo, in a successful lawsuit.

This means, among other things, a pregnant woman could conceivably (ha!) drop $500 for an abortion and then sue the provider for twenty large, which—I don’t know—may not have the dampening effect on abortions that is intended.

The legislation does delicately carve out an exception for rapists, who will not be allowed to sue their victims’ abortion providers. But the rapist’s brothers could. All ten of them, if applicable. You just can’t put a price tag on thwarted unclehood. I mean, yeah, it’s worth at least $20,000, but it could totally be more.

Governor Little made an impassioned and articulate objection to the bill’s language, which he believes is both unconstitutional and unwise, and said it weakens our collective liberties, and is likely to re-traumatize the victims of rape and incest. And then he the hell signed it. Because, you know, tiny Aryan babies, and re-election.

Ah, Idaho! Idaho (motto: We can’t spell our motto) is such a bastion of individual freedom that a large swath of rural Oregon residents are angling to yank the state border westward so they can be Idahoans too. Nothing should get in the way of personal liberty: we should be free to burn standing timber if we want to. Bring an assault rifle into City Hall if we want to. Aerosolize our mucus in a crowded theater if we want to. Refuse to carry an embryo to term if we…oh wait.

Meanwhile, back in the state of Washington, where Republicans are not in ascendance, the Republican delegation is upset that they were left out of the transportation policy decision-making. They were not consulted on methods for paying for the bill, and they thought it was awful that ordinary citizens were going to have to pony up an extra $45 when they first register a vehicle. (I myself have registered four since 1977, so it adds up.) That, by God, is a new tax. And completely unnecessary when the money could be raised if the state merely sued abortion providers. Or sued teachers who suggest gay people exist, or who say mean things about slavery. The money is out there: it’s just a matter of being creative.