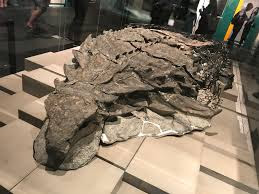 See, if I did happen upon a nodosaur, which looks like a 3,000-pound tailed cockroach with spiky armor, it might not occur to me that it would benefit from any sort of camouflage. Modern enormous animals such as the somewhat smaller rhinoceros just stand around all big and gray and obvious because nothing is really likely to take them down, and they know it. (They’ve missed the bet with modern humans, but it’s too late to come up with a new plan now.)

But studies suggest that the nodosaur did use protective coloration, which is an extremely neat possible fact that scientists have only just maybe discovered.  (There is disagreement among paleontologists, and until there is more of a consensus, or until the nodosaur becomes the focus of a new religion, we shall not employ terms of certainty.) Specifically, it is thought that at least one particular nodosaur–Borealopelta markmitchelli, named for the very excited fellow who spent seven years preparing its fossil with tweezers and a gnat’s paintbrush–employed a camouflage strategy called “countershading,” in which the top of the animal is darker than the bottom, or belly. Modern examples include the deer. 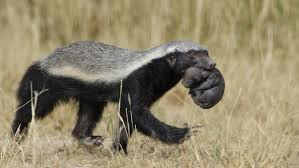 There are a few currently operating mammals that use the exact opposite of countershading–light on top and dark underneath–to signal to the world that they, personally, do not give a shit, and are thus dangerous and unpredictable (skunk; honey badger). But countershading is more popular in readily-edible animals.

Presumably countershading makes the deer, say, harder to make out in the landscape. Its shape is altered, for one thing. “Oh look,” your mountain lion might say, “there’s the top half of a deer floating through the woods. Crumb! I prefer belly meat. I suppose I shall let it go.” Nevertheless deer are routinely caught and eaten, which might happen if light conditions illuminate the belly side instead, and conceal the top part with all the scary pointy bits on it.

No, no, no, that’s not how countershading works. Ha ha! What’s really happening can be illustrated with a plain beach ball or a particularly round deer. The object throws shade on itself so that the lower half of it looks darker than the top half.  If the lower half  is lighter in color, the natural shading will make it look more uniform and two-dimensional and thus harder to see.

“Except it looks like just a cartoon of a nodosaur,” the ancient theropod’s buddy might say back. Both carnivores watch the landscape for a while, the ancient breezes riffling through the feathers on their tiny forearms.

“Wait just a minute,” Theropod One says. “There’s no such thing as a cartoon yet!” And the pouncing begins.

This tells us a few things. One: if an armored pineapple the size of a rhinoceros needed protective coloration, there were some seriously bad-ass predators in the Cretaceous (about which there is, indeed, some consensus). Two: scientists are marvelous.  The presumed coloration of Mark Mitchell’s dinosaur was posited by teasing out a chemical signature of the breakdown of a reddish pigment from 100,000,000-year-old fossilized skin. These days, your average middle-aged woman can’t go a week without her roots showing.

Another possibility, of course, is that there was some bad-ass vegetation in  the Cretaceous that needed sneaking up on. They’ve still got the stomach of Borealopelta intact, with its last meal inside. Stay tuned.