I Do Care. Just Not About, You Know, That. 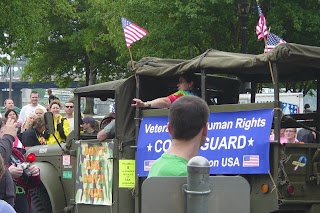 We seem to be getting near the end of the “Don’t Ask, Don’t Tell” policy in our military. Already over ten thousand soldiers have been let go for admitting they’re homosexual, and every one of them was fluent in Farsi. It’s gotten to the point that when someone even looks like he’s about to say he’s gay, the military jams its epaulets in its ears and goes “La, la, la, la.” So everyone is on board with unloading this policy. Unfortunately, it was put in place with no sunset clause, and the bureaucracy is loathe to get rid of something it might need somewhere else. So I propose a transfer. Let’s just move “Don’t Ask, Don’t Tell” to the arena of political discourse. We can change it to “Don’t Know, Don’t Care.”

Politicians are frequently accused of being sanctimonious, but they’re just representing their sanctimonious constituency. Talk to anyone of voting age for long enough and you’re liable to hear something along the lines of “I really don’t care if he was caught in a three-way in the church parking lot with Mel Gibson and an underage burro; what matters is he lied about it.” Let me stipulate right here that everyone involved in Burrogate is going to lie about it. There are certain things everyone lies about. We should just assume that if someone is asked about his sex life, he’s going to lie. I’m going to lie. You’re going to lie. If there’s nothing much to talk about, we’re going to lie about that. So unless our politician is running for director of the petting zoo, let’s call such questions off limits. Let’s not ask. It’s fine to hold politicians to high standards, but let’s keep the questions germane.

And perhaps, as much as we all enjoy taking a dip in the sea of piety, we might settle for allowing Barack Obama to be a role model by striding on the world stage like a grown-up and not insist that he also quit sneaking cigarettes. I’ve never had that particular monkey on my back, but it’s easy enough to observe that it’s a monkey with a lot of cling to it. People spend years trying to buck it off, but most of them have not had to report “I went five days without a cigarette, and then N

orth Korea fired a long-range missile at Hawaii.” Cut the man a break. Likewise, anything that has ever gone on under the desk in the Oval Office is nothing I need to know about. This is strictly a matter between the current occupant and the cleaning staff.

Let’s just ask the questions that matter. “We’re all behind you on this swell war you’ve got in mind, Mr. President. Where are you getting the cash?” Or, “Senator, could you elaborate on your personal financial stake in the tropical fish hatchery being proposed for northern Greenland?” Stuff like that.