I Lefse My Heart In North Dakota 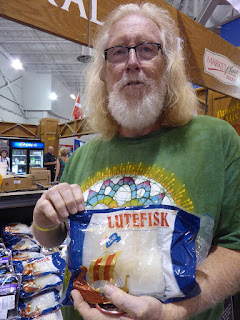 So there we were, four cousins, in Minot, North Dakota, at the Norsk Hostfest (motto: SCANDEMONIUM!), where we intended to get ourselves so saturated in personal heritage we’d come out buttery. Butter is a major reason Norwegians are nice, and also pretty much redeems the cuisine all by itself.

I was a little concerned about that cuisine, because I’ve mostly been avoiding wheat for over three years now. It helps me keep my weight under control. But I was pretty sure I’d have to relax my diet in North Dakota. And I was right. If you really want to lose weight, go to North Dakota and consume no wheat. You’ll be dead in a month. There are buckets stationed at the state border so that celiac sufferers can just go ahead and slit their wrists and get it over with.

Because here they grow mile after mile of wheat, and whack it up, and shovel it into gigantic elevators, and decant it directly into the grocery stores and restaurants, which then produce nothing but wheat-encrusted wheat bombs with extra wheaty goodness in the center. Norwegian cuisine in all its variety covers the spectrum from white to off-white. If anyone finds something green in their food, it is flicked away as a probable contaminant.  [Historical note: Scurvy has not been a problem since it was declared illegal by Erik the Red in 980.]

So at the Hostfest, there were several food courts offering an array of pale food. All things being equal, I decided to start off with Potet Klubb. Five minutes later, I also finished with Klubb, and looked around for a spot to sit quietly and consider my options with regard to digesting.

Klubb is made of wheat, potatoes, and mucilage, formed into wads and set to sail on a sea of butter. There were other offerings: rommegrot (wheat, milk, butter), and lefse (wheat, potatoes, lard, butter), and daringly yellow waffles (wheat, milk, eggs), plus Spud Hogs and Vikings On A Stick. Respite from the wheat can be found in Rice Pudding (still reassuringly white), cheese curds (white), or Lutefisk (white cod and Drano). Norwegian food is like polka music or Golden Girls reruns: weirdly comforting, and you always know what you’re going to get. In a nod to diversity, the Hostfest also featured a German delicacy, Knoephla (wheat, potatoes, butter). I have no idea what an Oof Da Taco is. 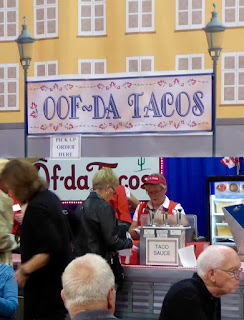 If I have a regret, other than eating the Klubb, it is that I missed the Lefse Masters Competition. Four winners advance to the finals here to demonstrate their prowess with potatoes, cream, lard, flour, and butter, combined, rolled out, and lightly beiged in a skillet. I am not certain what makes one lefse stand out from the crowd, but I do know that each contestant must complete two rounds in order to showcase lefse in both its variety (rolled-up, and left flat). And there is, my goodness, a shotgun start. And there are only three prizes, Gold, Silver, and Bronze, leaving the fourth competitor in ignominy, even though he or she has already bested hundreds in the prelims. Nobody wants the Beige Ribbon.

It was all very wonderful, but you can’t move much in a crowd of really nice people, especially with butter in your capillaries. So my sister Bobbie and I were much revived to take a walk in a perfectly grand coulee just behind Don and Betty’s house, right in the middle of Minot, where we found birds, bunnies, deer poop and its poopetrators, and squadrons of turkeys-on-the-hoof everywhere (white meat: just add wheat and butter). I was honored and happy to be there among all those nice people, but also happy to go home to Dave, who is almost as nice.

He has promised to make me a salad bigger than my head.