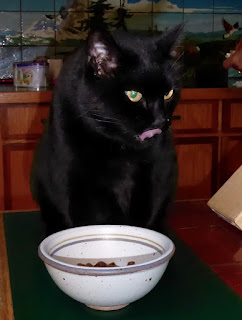 We keep her bowl of kibble in the kitchen. Same general vicinity as all the rest of our food. We’re not super tidy. There are food bits around to be found, if you’re in the entrepreneurial vermin class.

So this winter, in the midst of the Rat Capades, I discovered a neat cache of cat kibble in the kitchen, under a sofa, in a throng of rat turds. Not grain, not beans, not bread crumbs or fruit from the basket. Kibble.

And yesterday, an enthusiastic parade of ants discovered the kibble and sent word back to the nest that the Promised Land had been found. 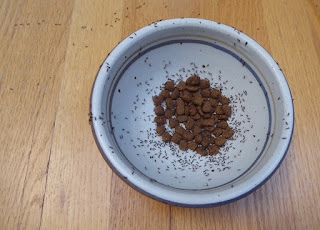 All of which leads me to wonder: would Iams Proactive Health Healthy Adult Original cat kibble make a good crunchy topping for a 1950s casserole in the absence of Durkee canned fried onion rings? What’s in this stuff, anyway?

That would be your essential oil, oleoresin, essence or extractive, protein hydrolysate, distillate, or any product of roasting, heating or enzymolysis, which contains the flavoring constituents derived from a spice, fruit or fruit juice, vegetable or vegetable juice, edible yeast, herb, bark, bud, root, leaf or similar plant material, meat, seafood, poultry, eggs, dairy products, or fermentation products thereof, whose significant function in food is flavoring rather than nutritional. In other words, it’s what you use if your Bark ‘n’ Bean Bake could use a little extra barky flavor punch. It’s chemically identical to artificial flavoring but has a fancier provenance; fortunately for consumers, it costs more. 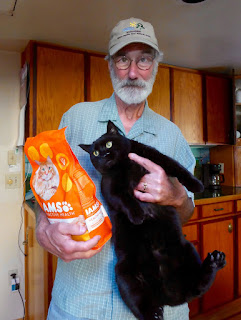 So, on to the chicken by-products. That’s got to be eggs, right? No. It’s any part of the chicken that people don’t want to eat because they think it’s offal. White people, anyway, with the possible exception of Norwegians, who probably still revere some ancestral recipe for tusk as a delicacy (as long as there’s butter). Chicken feet, backs, spleen, brains, lungs, things like that there. It would also include hen’s teeth, which do in fact exist and can be created by turning on a gene pathway discovered in a mutant toothy chicken, which is probably something the pet food industry wants to know about.

A lot of these things are also legally considered fit for human consumption, of course, as long as they are ground into sausage. Sausage is sort of defined as a tubular parcel of things you don’t want to know about.

Speaking of things you don’t want to know about–are you still here?–if you see something generically labeled “meat by-product,” you might have road kill, dead zoo animals, or euthanized pets in there. I’m all for reducing waste, so now I have a new plan for my own earthly remains. Cat food. Tater won’t touch it, but how bad could it be?