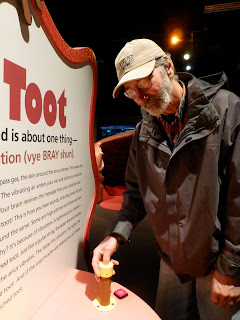 I’m always scouring the newspaper for good riffable stories, articles that poke out from the rest, things that hit some of my favorite themes. Piety. Perspective. Poop. And one day a few months ago a headline jumped out at me. “Evacuation Precedes Gas Blast,” it said, which certainly struck me as newsworthy, because in my experience the evacuation comes just after the gas blast. I was soon disappointed to learn that the article was about a terrible explosion in Massachusetts that flattened a strip club. I can’t even visualize that. Seems like it would be hard to do.

All was not lost, however. A few pages later, there was a photo of a young lad with his ear glued to a fart simulator. Bingo! He was attending the Grossology exhibit at our science museum, celebrating everything that smells, toots, crusts over, or slides out of you. Well, we just had to go, as it were. This is not your father’s science museum, with its cheesy dioramas, rock collections, and gigantic murals depicting every known dinosaur arrayed in front of a mandatory set of volcanoes. Here, children could climb a wall of zits. Or go all the way inside of a nose, something many of them have trained for their whole lives. The little boogers were everywhere.

In the giant nose, we learn that snot is produced in order to protect the lungs. Snot catches random particles and pollutants before they can be inhaled all the way. It’s a slick system. Cilia move the snot along until it is flushed away. Eventually. By sliding it down our throats at the rate of about a liter a day. Funny thing: if someone gave you a bucket of warm dirty snot, you probably wouldn’t drink it even if you knew you were the snot donor and had banked it yourself. But apparently we’re doing that all the time. It’s sort of like the phone and cable fees. They’re being siphoned out of our wallets more or less continuously in small quantities that we don’t even notice. If we just got hit up annually with a $400 fee labeled “chump charge,” we might make more of a fuss. Same way 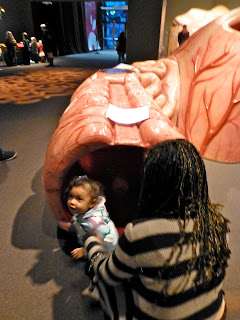 Adults were enchanted also. “This is right up our alley,” the newspaper quoted a visiting mother, although she was probably referring to the intestine exhibit. There was an entire gastro-intestinal tract set up for kids to slide through, and a lot of information, almost more than a person could digest. “You must be this tasty to enter,” the sign said (oh, I wish it had), and enter they did. And exit. Cute little shits they were.

But the star attraction was the flatulence display. Here a group of avid youngsters was allowed to play with a series of stretchy rubber gaskets mounted on air tubes, and they were encouraged to regulate the air and stretchiness to produce the grand human fart repertoire: the splendid variety of fart noises we are capable of, depending on embouchure, tension, volume, and pressure. I felt encouraged for America. These were our future scientists! Or possibly postal employees. Either way, proud. 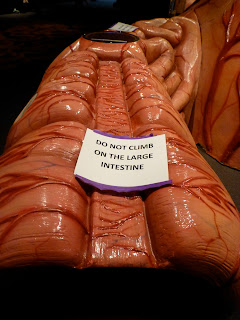 Thanks again to those who have pledged to sponsor me in my upcoming Birdathon! Y’all are too cool. Proceeds go to the good work of the Portland Audubon Society. And I wrote a poem for the occasion.