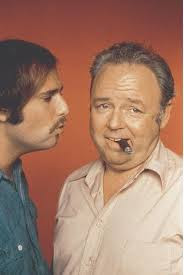 Archie Bunker’s in his chair, talking about a guy he works with. Why, the Meathead demands hotly, do you always have to call him “Black Willy?”


“So’s you can tell him from Regular Willy,” Archie says.

Well there it is. We’re a long way from everyone getting to be Regular Willy. And no sooner do we  have awful events like last week’s, when two black men were murdered by officers of the law, and five officers of the law were executed by a sniper on a personal mission, than all of America reacts with brief shock and retreats immediately to their own bunkers.

We do that because that’s where we feel safe, with our own kind, and also that’s where all our ammunition is. Dig in, and be ready to fight back.

We’re a very defensive people. We’re pretty sure everyone is out to get us. We are not really the home of the brave. We wouldn’t be bristling with either firearms or insults if we were. Behind our bunkers, we sort through our arms.

Black men are all thugs.  Or look like thugs, which is kind of the same thing.
Cops are all racists.
Black people kill the most black people.
We need more open-carry.
Not you, Rashawn.
No one gets pulled over and shot for no reason at all.
The sniper was a veteran who was ruined by our war machine.
The only thing that will stop a bad guy with a gun is a good guy with a gun.
Unless the good guy is a black guy with a broken taillight and the bad guy is a cop.
You can’t possibly know what it’s like to be a police officer who takes his life in his hands every time he puts on the blue.


All sorted out?  Ready to aim and fire?

All righty! Let’s get things rolling with a thoughtful essay about white privilege.

Are you calling me a racist? I’m not a racist. This is bullshit.

If you’re being introduced to the concept of white privilege, you’re not being accused of anything. You’re not being asked to apologize. Settle down. It’s a call to empathy. You’re being asked to consider that other people’s experience is unlike yours. You’re being invited to put yourself in someone else’s shoes. A teenager being pulled over by a cop. Or, a cop. Or, for extra credit, a trained killer back from Afghanistan with a heap of rage and a gun. There are lots of shoes. If we’re going to understand each other, we need to try them all on. It costs us nothing.

Imagine being a good kid. Or just a normal goofy kid who does stupid shit. And all your life you’re followed around whenever you go into a store. Women cross the street to avoid you. You and your friends on the corner are regularly questioned by the police when you’re not doing anything wrong, or you’re pulled over for no reason. Over and over and over, yes sir, no ma’am. Your parents have had to teach you what to do with your hands and body when that happens so you don’t die. Or, imagine being that mom or dad. How do you feel?

It should be so easy to imagine. If we could step just outside the bunker. If it weren’t so comfortable in there. And there wasn’t all that ammunition we’d be wasting.

And so now we witness our fellow citizens crying out in despair and screaming stop killing us, and count on it: a whole lot of white people are going to be affronted. They aren’t killing anybody. They get their feelings hurt.

But they get to keep their sons.

I knew this guy, once. He thought it was nuts that black people are so worked up all the time. Overreacting. Like, buckle down, get over it, right? Get a job and ack normal. Same dude went on for hours about some rich lady on his mail route who looked all snooty at him like she thought she was better than him. Hours. One would think he could understand the sting of condescension and dismissal. And work from there to inconsequence and actual existential danger.

But because he has never felt mortally threatened by a cop, he can’t imagine that police work might attract a certain percentage of bad-ass, dangerous bullies. Instead they’re all brave heroes with really hard jobs to do, and their victims must have done something to deserve their fates. He simply could not imagine that if you kept your head down and stayed on the straight and narrow–you know, mostly–you would have anything to fear from the police.

Except our lives and experiences are not all the same. And if your reaction to black lives matter is all lives matter, you’re not listening. You’re behind your bunker, on the defense, and not paying attention to other people’s testimony. And that is all that’s being asked of you: that, right now, you consider that black lives are in fact disposable in a way yours is not. Jesus. Pipe down and just listen.

That won’t kill you.