In Thickness And In Stealth 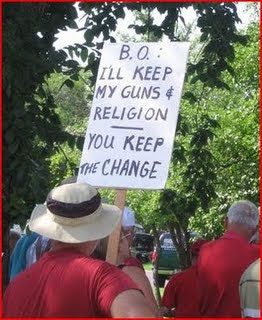 People are pretty het up about Obama’s plan to reform health care in this country, and no wonder. The current system is confusing, discriminatory, ineffective, heinously expensive, and ours, dammit. If we’d wanted great guaranteed health care at a great price, we’d be French.

This is America! Why would we give a government bureaucrat, maxed out at a GS-19 pay scale, the power to deny care when it could be denied by an insurance company and generate some really mind-blowing profits?

The health care industry in this country has a kabillion of our hard-earned dollars, so naturally we’re very protective of it. And entities with a kabillion dollars do not customarily sit on their hands and whimper when they’re threatened, no sir. A kabillion dollars can buy you a whole fleet of politicians, news organizations, and pudgy radio entertainers. A kabillion dollars enables you to manufacture pure crap out of thin ether, sprinkle it on the masses and make them swear it’s maple sugar. Who eats this crap? Why, you’d have to be dumber than sheep.

So thousands of folks, enraged and woolly, have flocked to town hall meetings, carrying signs and carrying on. You’ve probably read about some of them.

“STATES RIGHTS NO NATIONAL MEDICAL DATABASE” (Protesters countering with signs reading “FEDERALISM NO BAKE CHEESECAKE” were reported to be from the Irrelevancy Faction of the local chapter of Cognitive Dissidents.)

“FREEDOM IS NOT FREE” (Or even reasonable, something it has in common with the health care industry.)

“ONE NATION UNDER GOD, NOT UNDER SOCIALIZED HEALTH CARE” (Right on. Socialism threatens to deliver a basic level of health care to all, but God was always a giveth-and-taketh-away kind of Guy.)

And, of course, famously, there is the fellow who bellowed “Keep your government hands off my Medicare!” He was later seen petitioning the sun to quit blocking all the light. Is it really in the interests of the spec 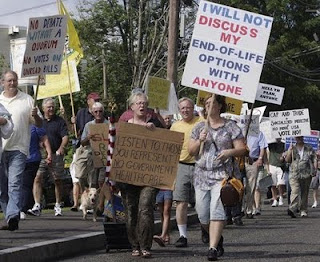 ies to provide this gentleman with health care? Liberals believe that they must, although they wistfully suggest that, at the least, he might be constrained from operating machinery. Forklifts, voting machines.

Many important public figures have gotten into the act. Representative Roy Blunt, Republican from Missouri, declared that, at age 59, he would be denied a hip replacement if he were in Canada or the United Kingdom. This assertion is demonstrably untruthy, and to his credit, when this was pointed out, he apologized and retracted his statement. “I misspoke myself,” he admitted solemnly. “I meant to say that in Canada or the United Kingdom I would be required to demonstrate my worthiness to the government bureaucrats by hopping on my good leg for six or seven months while wearing a chicken suit.” Apology accepted.

Then Sarah Palin, in a bid to wrap up the 2012 nomination of the Loonycakes Party, brought up the terrifying prospect of Obama’s Death Panels, groups of government bureaucrats which will convene for the purpose of deciding whether your grandma will be allowed to live. And there may indeed be much to fear from socialized medicine. Certainly our socialized public school system has let us down, in terms of delivering a thoughtful and educated citizenry.

That said, we must here salute Mrs. LuVerne Thompson’s talented class of seventh-grade boys, who were responsible for the widespread dissemination of the photos o 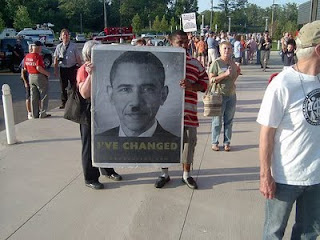 f Obama with horns, a tail, and a Hitler mustache. (Some suspect Photoshop, but according to Mrs. Thompson, “it’s all real, honey. Those horns and tail were created using stem cells ripped from one of our Lord’s precious potential snowflake babies, which He in his good time will dig out of the freezer just as soon as He rounds up another four-hundred-thousand wombs.”) The rest, however, is almost certainly bogus. Even Obama’s detractors admit he’s way too cool for the Hitler mustache. But they still defend the basic allusion. After all, the health industry draws a comparison between health care reform and the worst of Nazi Germany for a very good reason. And that reason is that the Spanish Inquisition no longer packs the same punch.

Liberals are appalled at the analogy. But just wait until word gets out about Obama’s secret plan to supplement the Food Stamps program with parcels of grandmother meat.