Into The Neutral-Weave Arms Of Morpheus 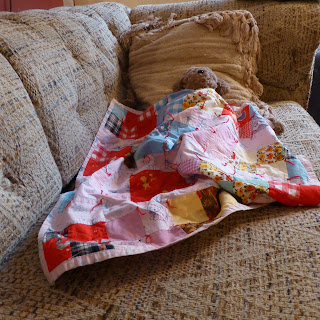 It’s well before my bedtime, and Dave is sound asleep on the Sleep Fumes Couch. Dave is not a good sleeper. He gets by on the virtue of the first three or four solid hours he gets just after finishing dinner, and then he cobbles together a mosaic of wakefulness, TV, brief losses of consciousness, and the internet, until he gives up around dawn and starts another productive day. He can sleep in the car. In fact he can’t stay awake as a passenger in a moving automobile. When he’s really short of sleep he’s been known to beg me to drive him around. There aren’t really too many adults who get all the sleep they want. It’s a gift.

That’s why we think of our Sleep Fumes Couch as a gift, freely offered to anyone who visits our cabin. No one is immune. When we bought the place, it came with furnishings, such as they were. They included mismatched cutlery, board games, antique packets of cocoa, and a fair amount of furniture that couldn’t withstand ordinary adult use. So a lot of that has gone by the wayside and been replaced by garage-sale items of equal cheapness and more substance.  The Sleep Fumes Couch that came with the place is an exception. It has reigned in its original position from the get-go. 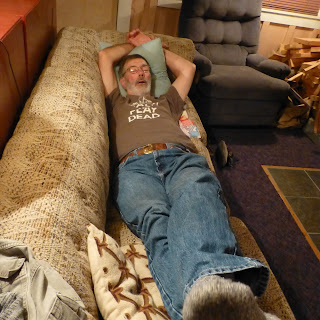 It’s sturdy and has one of those ’80s neutral, unobtrusive weaves. Nothing objectionable about it. In all likelihood it has served, or is serving, as bedding material or actual beds for a transient rodent population. No matter. At some point anyone who visits this cabin will find him or herself irretrievably drawn to sit on the couch, possibly sprawl a little, and then be sucked into it like an octopus in coral. They virtually disappear. Their mouths gape. Noises are emitted. Everyone not on the couch, which is everyone else at this point–because they are taking up the whole thing–is quite amused by this. Photographs are taken. We all feel a little superior because we, personally, have not lost control of our saliva in the middle of the day. But our time’s coming.

We can only surmise that the Couch has magical Sleep Fumes in it, and we are all helpless in its vicinity until Glinda the Good Witch shows up and snows on us. There’s a possibility that the lure of the Sleep Fumes Couch has something to do with the confluence of abundant clean air and fatty foods and romping good exercise and a nearby stoked wood stove and, gosh, alcohol. But you never see people curled up on the floor, or with their foreheads plonked into the mashed potatoes, except that once, and there was Benadryl involved then.