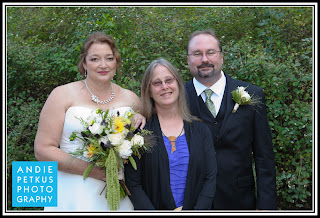 Due to the same archaic niceties that lead us to refer, inexplicably, to the “Honorable Justice Clarence Thomas” or to Mitch McConnell as the “distinguished Senator from Kentucky,” I am now known, in a certain small circle, as “Reverend Murr.” In a sensible world, I would be “Irreverend Murr” at best. Nevertheless I take this as a great honor bestowed upon me by my neighbors Beth and Dean, and also the internet. Beth and Dean wanted to get married and, for reasons known only to them, mine was the name they came up with when casting about for an officiant. They trusted me to come up with suitable oratory for the occasion. Did they know what they were getting into? 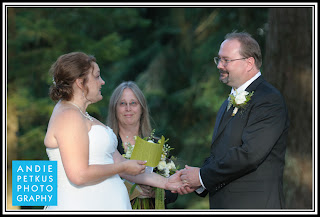 There were several outfits willing to ordain me as a minister with no muss, fuss, or money, and I selected the sturdy Universal Life Church, hoping it would allow me to pretend to sell insurance, too. The Universal Life Church has been up and running for over fifty years. They’re not big on dogma, and neither am I. The Church believes in “the rights of all people…to practice their religious beliefs…be they Christian, Jew, Gentile, Agnostic, Atheist, Buddhist, Shinto, Pagan, Wiccan, Druid, or even Dignity Catholics.”

So it’s the Holy Church of Whatever. 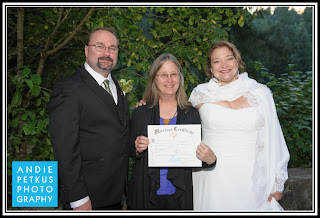 Because when it comes to matters of God, I am officially without opinion. I am an Apatheist. I don’t believe, or not believe, or wonder. I just don’t care. When presented with a slather of splendors from duck dicks to spittlebug farts, I’m all “ooo! Ooo!” not “author,  author.”

None of this bothers Beth and Dean. Beth and Dean are grownups in love, and they know what they’re doing, and it’s just a small step beyond their mature regard and devotion for each other into the state of Wholly Matrimony. If Oregon is fine with my contribution to this event, that’s all we need.

So God didn’t make it into any of the vows or pronouncements, either, by intelligent design. No one associated with the wedding believes this is a miscalculation. God is busy. Not busy busy, just busy the way all the rest of us are. He joined Facebook on August 6, 2010, and probably hasn’t gotten much done since. So far he’s gotten 3,332,975 “likes,” which is a lot, but not nearly as many as Eminem has. Someone has posted on His page that “God needs a ‘love’ button. Click ‘like’ if you agree.”

Shoot, everybody needs a love button. I’ll show you mine if you show me yours.

Meanwhile, the foremost saint in my pantheon, Mark Twain, has only 397,294 “likes.” If I and the Church of Whatever have any influence, those numbers are going straight up.