Is “Leapin’ Lizards” Too Obvious? 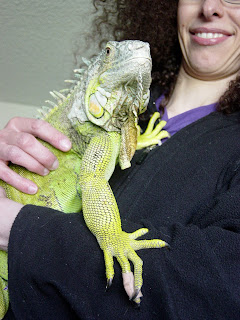 It’s cold. Folks are bundling up in Georgia. Frozen lizards are dropping out of trees in Florida. Children are staying home from school in Ohio.

Oh, about the lizards. People are going to see that falling-iguanas thing in different ways. Some are going to call it proof that Al Gore is just being mean. Some are going to declare it the eighth sign of the Apocalypse. Me, I’m a simple soul. It reminds me of two things: (1) Cold iguanas. (2) Falling iguanas. Both of these are very familiar to me.
Thirty years ago, I had an iguana who was forever falling through the air. Or maybe it was just the once. Sparky’s agenda on any given day involved locating a heat source and glomming onto it. It’s a reptile thing. They get most of their energy for movement and digestion from external sources. This is why many iguana aficionados believe their pet lizards are personally fond of them, although I suspect they wouldn’t be nearly so affectionate if they were not owned by warm mammals. You’ll never see an iguana crawling on Dick Cheney, for instance. 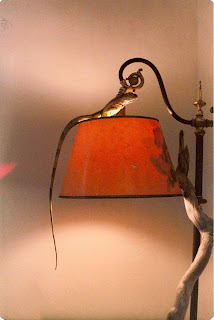 So most of the time, when we’d look around for Sparky, who had the run of the house, she was in the same places: the coils on the back of the refrigerator, the radiator, or spread across the top of a floor lamp with her belly over the light bulb. One day, we couldn’t find her anywhere. But we knew she would turn up, so we went to bed. That’s when we spied her on top of a curtain valance. She had no doubt traveled up there in the daytime when the sun was shining strong through the window, and as dusk fell, she got colder and colder, eventually becoming too chilly to motivate back down. Dave, who is an exceptionally warm mammal and a nice guy, plucked Sparky, rigid, from the valance and stuffed her under his T-shirt. She didn’t move much at first, but as the belly heat began to take effect, she started to come alive. Just about the time Dave was beginning to look like a victim in the Alien series, he reached under his shirt to extract the lizard and snap her back onto the refrigerator coils. But Sparky had lots of energy by then, and reacted by scooting up his chest and into his armpit. I’d never known Dave to be ticklish before. Yet there he was, a long green tail hanging out of the front of his shirt and a fringed green head poking out his sleeve, hopping up and down and screaming ACK ACK ACK. I had the same reaction to this as anyone would. Why can’t this be happening when the Jehovah’s Witnesses drop by?
Which brings me to the falling-iguana incident. At a time in my life when I thought it was impolite to tell a salesman that I wasn’t interested, I let in a nice Avon lady and agreed to let her show me her box of potions. She was smiling, and alarmingly fragrant, and I knew she didn’t have a thing in there I wanted. It should have been obvious to anybody that I was not a woman who spent money on cosmetics. To an Avon lady, however, I was just someone

who really, really needed to spend money on cosmetics. As the minutes wore on, I became increasingly aware that (polite soul that I was) I would have to locate something to buy so she would not have wasted her time. An array of skin cream samples dotted the sofa. And that is when Sparky, who had been biding her time on the top of the curtain, plummeted gracefully between us and landed plop on the sofa, the Avon lady bounced straight up six inches and made eepy noises, and dozens of tiny jars of skin cream flew into the air and rolled onto the carpet. She left quite soon after, tucking my order for a lifetime supply of face goo into her briefcase. It was totally worth it.