It Makes It Easier To Clutch 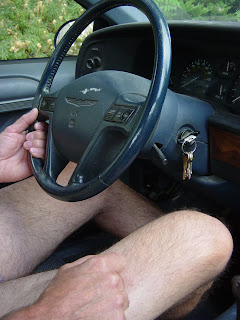 The other day, the police pulled over a pantsless man on the freeway. He was doing 69 in a 50-mph zone. However, it was the speeding that got the cops’ attention.

When asked, the fellow explained that he had lost his pants. The cops searched the car but didn’t find any pants. Well, duh. When I lose my pants, I never look in the car. At least, not since the seventies. Nor do I drive off to look for them. Most of the time, I stay right at home until the condition clears up. If truth be told, most of the time my pants are more abandoned than lost, although it might feel the same to the pants.

However, there are probably many reasons a man might drive around without his pants on, and one of them is surely the reason the man gave. Your whole life shouldn’t have to come to a crashing halt just because you lose your pants. Nobody’d get anything done in a world like that. There are still things to do, places to go, people to flash. But it’s still a good idea to avoid committing a serious crime under the circumstances, unless you enjoy the attention. Oh, sure, there is a crime for which pantslessness is practically a uniform, but that’s an exception.

You hardly ever hear about a bank robber, for instance, who isn’t wearing any pants. Whereas it’s true that the very act of robbing a bank requires a certain kind of personal equipment, you don’t want that equipment to be readily identifiable in a line-up. You’re too likely to be fingered.