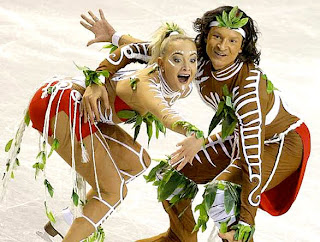 This year the Winter Olympics happened in our time zone. This means we don’t get to watch anything live. At eight p.m. the television begins to emit a steady stream of stale events, from which we can pick and choose. Figure skating is always a treat: will American favorite Lurleen Neewack be able to land the elusive quadruple-splatchnatz with the triple putz combination, or will it be revealed, upon reviewing the tape, that she came down .275 degrees past a quarter-turn on her landing skate and thus 2.3 seconds before she actually lifted off, a disqualification? Who cares? The spectator is there to see the efforts of the costumer, fresh off a stint fashioning bridesmaids’ outfits for parrots. He is facing stiff competition from the Russian team designer, who, with sequins, feathers, and several yards of baggy flesh-tone material, was able to rock the Australian Abor 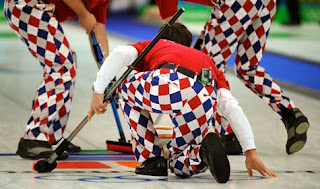 iginal Shar-Pei theme. From home, it looked like a toss-up.

Outfits are a perfectly reasonable way to decide what to watch when dipping into Winter Olympics coverage. And that is what has drawn so many of us to that fine sport for which Curling Pants were created. We don’t even want to know what Curling Pants do; we’d rather speculate. However some understanding of the rules of Curling helps to better appreciate the sport.
Curling was invented in Scotland shortly after the discovery of heavy drinking. Each curling team consists of four members: the thrower, the skip, and two tidiers. The thrower releases a jelly doughnut made of granite with a handle on it (a “stone”), and it travels across the ice, coming to rest as close to the center of a target at the end of the sheet as possible. In order to influence the speed and trajectory of the stone, two team members aggressively tidy the ice in front of it. Stones may ricochet off other stones, displacing them, and points are awarded according to the number of stones ultimately closest to the target. It is essential for the thrower to release the stone before it passes over the “hog line,” a determination that used to be made on the honor system, but in competitive curling a special stone is used that electronically detects if the thrower’s hand is still on the stone. An electric field at the hog line will detect any infraction and cause the stone to light up like a UFO. This was designed to eliminate the need for an official, avert controversy, and perchance reduce hooliganism among the spectators. Sadly, the 2010 Olympic Curling Event was still not hooligan-free, so plans are underway for the 2014 event to create a special stone that will cause the thrower to burst into flame upon violation. At the other end of the sheet, the skip’s job is to hop up and down and scream at the other members of the team, and occasionally to finish tidying. Each team throws eight stones. 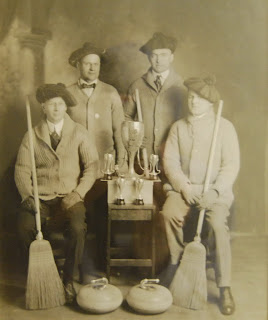 All the rest of the events can be reliably ranked by how closely they resemble curling. Bobsledding, for instance, also features teams of four, and requires a lot of stones. The first man in the bobsled is the “driver,” and the second through fourth are the “meat.”
Even closer to the ideal of curling is the Women’s Giant Slalom, in which racers are sent down the mountain every fifteen seconds or so, allowing later racers to carom off the previously crumpled or deceased entrants, and the team with the most members arriving right-side-up at the bottom of the hill wins the gold.
But our heart remains with the curling competitors, especially Canadian home-town hero Cyril “Syrup” Parfait, of Vancouver, B.C., whose parents, having seen his early promise, quit their jobs as neurophysicist and Prime Minister in order to accompany their son to the best Jamaican training facility, where they eked out the money for his coaching by taking jobs licking gym floors. It appeared that M. and Mme. Parfait would not be able to afford to attend the Olympics to cheer their son on, but thanks to the generosity of the good folks at Winnipeg Whack-A-Moose, someone was able to swing by in a Dodge Caravan and pick them up.
By Murr Brewster|2021-11-09T21:30:15-08:00March 3, 2010|Uncategorized|17 Comments