It’s Being Looked At

It hardly seems fair, but I guess now, on the list of things you must not do after your first trimester of pregnancy, we can add “being gazed at by Braco.” Braco is a healer. A healer who gazes. At you. Not one on one, so much, but at special Gazing Events with lots of other people in attendance. People show up from miles around to attend Braco’s gazing sessions and a whole lot of them report feeling better about things.

Braco himself does not claim to be a healer, and says at best he is a conduit for healing energy that comes from somewhere else, most likely the sun. Remarkably, attendees at a gazing Braco performed from the top of the Sun pyramid in Mexico reported seeing a circle of white surrounding the sun afterwards, which might have been a refraction of the sun’s light off the tiny ice crystals in high, thin cirrus clouds but might also have totally been a personal how-do-you-do from one star to another; there’s simply no way of knowing. 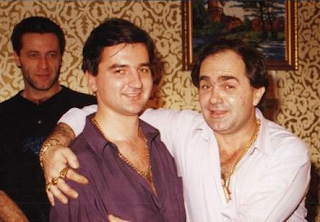 Braco (pronounced Braht-zo) was born Josip Grbavac in a vowel-poor region of Croatia, and was aware of his power to channel the Unknown Infinity early on, although he went ahead and got a degree in Economics just in case. He met and was mentored by an older healer, Ivica Provic (pronounced Shlotz-kaputz), who had also shown signs of being special early in life, when, as he reported, a little piece of the sun entered his left leg and traveled through his body to his groins. This had troubled him for years until he had a vision of a boy with a big injection who came to inject him. After that he met the young man he renamed Braco, and they really hit it off. Ivica was an economist too, if you can imagine that! He had had more than one near-death experience before having the all-the-way one, to which poor Braco had the misfortune of being the sole witness. Ivica, who never wore less than a kilogram of gold, uncharacteristically removed all his jewelry and his wallet and was then swept away by a rogue wave. Unfortunately for him, his pal Braco did not discover his own healing powers until a day or two later.

At first he trained his Giving Gaze on individuals but too many people clamored for a gazing, and now he gazes only at big groups. He charges eight dollars for a ten-minute session, or four dollars an eyeball if you buy both, which is a pretty good deal, considering a plumber won’t show up for less than a hundred bucks. He attracts very large crowds because a lot of people have something wrong with them. In addition to barring women past their first trimesters (when hormones make them skeptical and grouchy), he does not allow people under the age of 18 to attend, due to the intensity of the energy, and also they might fidget and make fart noises. He does allow live streaming of his gaze for free. (In fact, he’s live-streaming today through the 18th.)

Also, and only at the sessions, his trademark jewelry is available for purchase, such as his double-sided thirteen-point gold-and-diamond sun pendants at $470 a pop.

All he does is gaze, and as a writer, I find this his greatest power. There are approximately eight thousand ways in English to describe a look, from glimpsing or glancing to peering and staring, and eyes can drill, and cut to the side, and flash, and drop, and be cast down or askance, and be daggers or gimlets, or what have you, and in spite of the sheer poundage of eye-related pages in the thesaurus, by the time you’re a quarter of the way through your novel you have completely run out of them. Try to sneak one in you’ve already used in chapter one and your readers will hate you for it. They will roll their eyes. They can do that more than once, but you can’t. Maybe it’s easier in Croatian.

Because Braco has lots of books for sale. Also DVDs. Just with the gaze. The audio versions didn’t get any traction.

Hat tip to Pat Lichen for introducing me to Braco, whom she discovered the standard way, by finding his card while rummaging though an old box in church.