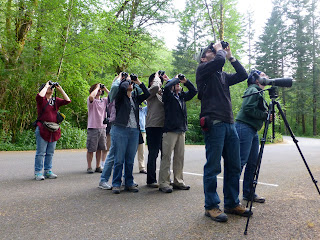 It’s May again, and regular readers know what that means around here. It means the kitchen is crawling with Windex-scented ants, the chickadees are parked in the birdhouse waiting to see which one of them an egg will drop out of, and I’ve just come back from my Birdathon trip with the team “The Murre, The Merrier.” This is my second year with the group, which qualifies it as a tradition. In a Birdathon, an individual or team tries to spot as many different species of birds as it can in a given period, even though many of them already come spotted.  For this effort, good people, friends, beloved blog readers, and resigned, annually-hit-up family members part with cash for the Audubon Society and its conservation work. Thank you!

Of course, I suck at this. My bird-identification skills are not good enough to nail down a seat in a respectable birding van, so I bake cookies. Everyone else is better than I am, and some are certifiably freakish. Watching them nail down bird IDs is like watching the Rain Man recite the phone book. We were going for 100 species. The team record is 108. 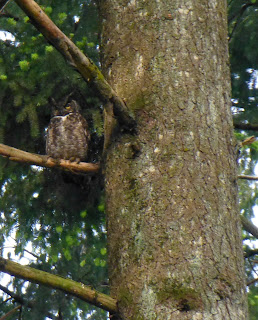 A note: the rule is, it only counts if two people identify it. And hearing its song counts. Real birders are very good at that because they know the language. For me it’s like going to a bazaar in a foreign land, with people crammed in elbows to armpits and all hollering in a whole different alphabet. I can’t make out a single word. The birder can stand in the center of the plaza with her eyes shut and pick out the one fellow who’s hawking ground yak balls, and tell you which stripey tent he’s in, too.

If you see a “life bird,” that is, a bird you haven’t seen before, you are expected to execute a “life bird dance,” hopping from one foot to the other with arms flapping. If you’re rhythmically challenged, a “life bird wiggle” will do. If you’re the most inexperienced birder in the group, you can be doing a lot of wiggling. If you’re forgetful on top of it, you can get three life bird dances out of one bird. It’s downright aerobic. I was thrilled with my first life bird of the day because I’m not likely to forget it: the lazuli bunting. Not so any of a number of speckled mud-pokers on the coast. For me, discerning whether it is Greater or Lesser, Semi-Palmated or Full-Bore Palmated, or Long-Billed or Short-Billed is hit or miss, more or less. I couldn’t tell them apart if they were standing in a police lineup with the measurement dealie behind them. “Is that a life bird for you?” my teammate will ask. Sure. It will be next year, too. It just doesn’t take. Hell, I’ve looked up the female red-winged blackbird in the wrong section of the field guide at least fifty times now. No offense, but I’m not going to remember you if I meet you, either. 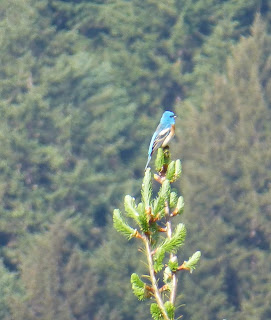 Don’t think of this as a walk in the park. It’s cutthroat. There are other teams out there. We’ve got people who say things like we’ll pick up the tits in the parking lot and score the rail on the way to the coast to knock off the peeps and the rhinoceros auklet, and then we have people like me, who just like to hear that kind of talk.

We always do our best, but this year there was the added incentive of a challenge from Patty’s team, The Paddywagon. (The Red-Breasted Wine Suckers were not considered a serious threat.) The mysterious Patty texted us throughout the day with updates. She was decent enough to give up the location of the coveted Red Knot and we reciprocated with her missing Kingfisher. We were holding our own, were even a little ahead, and then roared to a finish with a record-smashing 119 birds as the light began to fail. We posed with 119 fingers aloft, got back in the van, and rounded up to 120 by bagging a merganser from the vehicle as we hurtled back home. Fists were pumped and high-fives negotiated, while a fascinated kingfisher kept pace out the left window. Then Patty texted in with a final tally of 121.

Even in the interest of public safety, we didn’t need the big warning Birdathon sticker on the outside of our vehicle. If you see a van weaving down the highway for forty miles with all twelve heads craned out the windows looking for a kestrel on the wire in the dying light, you know enough to give it room. You just know.