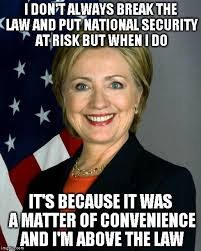 The Democratic nomination process is either over, or it’s not, or it never will be, and now everyone’s barking on the internet. I’ve got my hands over my ears, begging mommy to make it stop. I’m used to Our Side fighting the Other Side, but people? This is making me nuts.

Last fall I watched five Democratic candidates for president in a debate. They each made a lot of sense and I’d be happy voting for any one of them. They were respectful of each other, too.

Now there’s talk of rigged elections. When I look at the evidence, it seems heavy on anecdotes and entrenched suspicion. Voter fraud or rigging must be investigated, but I’m not taking anyone’s “bad feeling about something” to the bank. I know how this works. As soon as you decide “they” are out to get you, you will see evidence of it everywhere. We are a most suggestible species, even more so now that every odd notion that shows up can be disseminated worldwide before anyone has time to check the math.

And this was also the year we all apparently learned how the parties nominate their candidates. Horrors. Superdelegates, caucuses in the laundromat, winner-take-all, reading chicken guts under a full moon, whatever–they’ve done it for years; it’s their club and they can write the rules however they want to. But you can join the club and get active and try to change them if you want to. It’s never been one-person-one-vote. If this was all a surprise, consider yourself educated, but not cheated.

Here’s what I’ve noticed. All you have to do now to work up a righteous froth is comb through the conspiracy theories and curate your own dudgeon. Take what works, discard the rest. It’s easy. 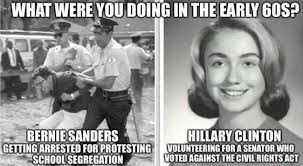 That’s how we know Hillary Clinton is the most loathsome candidate in the race. My goodness, but she is awful. People are torn over whether she should be in jail or in Hell. You actually go back and check her positions on things, and her votes in the Senate, and her accomplishments, they’re pretty solidly left of center. It’s a mixed bag: strong on abortion rights, disappointing on the environment and warmongering. But evidently, as well as being a fictional murderer and a symbol of corruption, she stands for everything else we revile. She murders Muslims and can’t frack fast enough and used her own email servers so she could put LOLs on State Department business and did something-or-other in Benghazi and holy cow there’s a forty-year-old video of her doing an embarrassingly bad MLK accent.

What she is, of course, is a moderate-to-left pragmatic politician with a stout record of accomplishment who has been praised by members of both major parties for her ability to get some things done, because she is willing to horse-trade a little and make progress in increments rather than make none. That’s sort of the way things used to be done, before things quit being done at all. She’s taken a bunch of money from Wall Street, like every single other political figure out there on both sides except Bernie Sanders and Donald Trump, but there’s no good evidence she’s in their pocket. 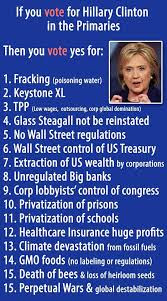 As I recall, it was she who first pushed for universal healthcare twenty years ago, for which she was accused of not knowing her place, or having fat ankles, or treason, or something. She got in a ton of trouble for speaking dismissively about baking cookies right around the same time. Oh, and using her maiden name in a subordinate role. And murdering her close friend. All of a piece. Just today I read that she’s been “wrong about everything since she was a Goldwater girl.” That would be 52 years ago. Remind me not to run for office.

I don’t even know how she’s able to stand upright at all after forty years of this shit. She is incredibly tough, smart, and resilient. Those are traits we might want to see in a President if it weren’t, you know…if it were someone else. But we can’t stand her, because she’s only mostly right. And we lefties–we’re like Megachurch Dads, now. We’re demanding a Pledge of Purity.

Well, I get it. My go-to-the-mat issues are so dire–climate change, extinction, unsustainable growth, and the obliteration of basically everything–that “incremental” doesn’t work for me, either. Change simply can’t come fast enough, and we’re probably already screwed.

But we keep trying. So you bet I voted for Bernie. Yes I did: I voted for all of them. Howard Dean. John Anderson. Canvassed for Clean Gene McCarthy before I was old enough to vote. When I was growing up, I knew we were Adlai Stevenson people before I knew my own phone number. I associated it in my mind with the fact that we used a push mower and had a compost pile and an old car, too. Rumor had it Daddy briefly signed up with the Communist Party in college. This apple thunked straight down from the tree. And when you vote for idealists, you take your losses hard. 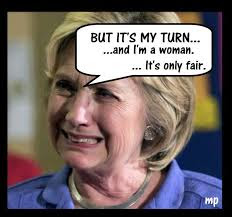 I voted for them to declare my conscience even though none of them would ever have been able to push through the reforms they wanted. And that was even before the opposition party abandoned the truth altogether in favor of the sour victory of deadlock and destruction. No one figurehead will be able to do what needs to be done to address the financial sector, the carbon bomb, or our obscene income inequality (formerly known as piracy), until people stand up and demand it. A lot of people. And they have to keep standing up. It will be hard work, and frankly, there aren’t enough of us. Most of us are watching Netflix.

But right now we have a strong, smart, tough candidate on the right side of most issues running against a cartoon character. The Republican brain trust knew long ago that the only way they could get their big orange toddler elected would be to divide the opposition. Instead of accusing Hillary of murder or lack of femininity, which doesn’t work so well on lefties, accuse her of personally corrupting the election process, or being in the pocket of Big Oil or Wall Street. Slide that propaganda into the social media, and plenty of people who get their information from memes and posters will buy it. I’m concerned about these things too, so I looked into it. It doesn’t hold up.

But I do know that the entire Republican platform can be found on Satan’s private email server in Hell. So ease up on Hillary. She can take it–how, I don’t know–but I can’t.