Ivanka: The Moral Leader We’ve Been Waiting For 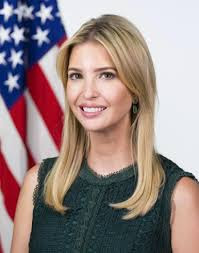 By the way, does Tiffany get to be a first daughter too, even though she’s farther down the line of success, I mean succession, and needs more plastic surgery to make standard? No matter. We’ll go ahead and call Ivanka the first daughter, although there’s probably no way of knowing at this point how many there really are, either fleshed or flushed.

Anyway, back to Ivanka’s important pronouncement. She really isn’t getting enough credit for it. She is now in a high enough position she can look right down into the hearts of Americans, most of them anyway, and she likes what she sees. She says:

“I don’t think most Americans, in their heart, want to be given something. People want to work for what they get. So, I think that this idea of a guaranteed minimum is not something most people want.”

And she is absolutely right. Most people not only want to work, they also want to be paid for it, and not at a wage that has been driven down over the years by employers’ willingness to exploit a vulnerable immigrant slave class for their personal profit. I’d go so far as to say most people who put in at least a forty-hour work week would like to be able to rent some kind of shelter and feed themselves, and it would be super awesome if they didn’t have to worry what would happen if they got sick, too. You know, they’d like to be able to live modestly with some security, like they do in those backwards countries like Sweden and Denmark.

And all that is totally possible as long as we listen to our First Daughter, The One That Counts. Because if it is true that most Americans want to work for what they get, things are about to change for the better around here. This means Americans like little Ivanka and her peers–and who knows them better?–must be totally on board with a maximum wage. You make a million a year, five million, fifty million–we should be able to decide on a reasonable limit somewhere–that really ought to do it for you, assuming you want to work for what you get.

We could even cross our fingers and pretend everyone in that range has worked hard to make the world a better place. Ha ha! But there’s got to be a certain amount above which we can all agree that, no matter who you are, you cannot possibly have earned it. Then we scoop up your soul-corrupting excess, everyone else gets a decent minimum and health care and a modicum of support and security, and you still get to be rich as all fuck. Nothing but winners here.

And, Skippy? You might make a case that you’ve earned all your money, up to a point, but once you’ve started just piling it up instead of paying your workers decent wages or safeguarding the environment, it’s time for the grownups to take over. We don’t let the entitled brats run the show. They’ll get spoiled, and we want them to be civilized members of society.

It doesn’t even have to be tied to merit. A generous society can even reward those who haven’t worked a day in their lives, if we want to. It would be nuts not to confiscate most of the utterly unwarranted millions they got from dear old dead dad, but we can let them have a real nice start without penalty, a bit of a boost, and after that it’s all up to them.

There is such a thing as a “self-made man,” but of course Ivanka’s daddy isn’t it. If you were going to make a man, would you make one like that? Of course you wouldn’t. But we can let folks like him get that nice good running start before we start relieving them of their unearned excess. What we can’t do is abolish the estate tax altogether. That would be morally corrupting, and sweet Ivanka wouldn’t hear of it.

Because we’re Americans. We all want to work for what we get.