Just Bury Me In A Shoebox 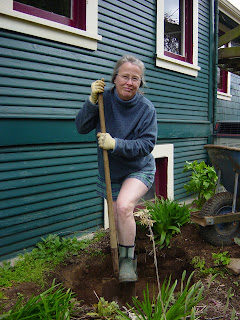 When I walked out with a shovel the other day and told Dave I was going to dig a big hole, he got a little nervous. “How big?” he wanted to know. “Six-five?”

Dave’s counted on my reluctance to dig holes over the years, correctly suspecting that I’d tire long before I’d gotten his grave dug. But I just found out that it isn’t really necessary to dig that big a hole. You’ve probably read about James Hines, the fellow in South Carolina who, at 6’7″, was too big for his casket, so the undertaker undertook to chop his feet off and wedge them in alongside his body. People are pretty upset about that undertaker, and for good reason. What kind of person would do such a thing, when he could have cut the head off and placed it on his chest between his hands, where the lily usually goes? That would have had so much more dramatic impact when they exhumed the body.

The story does vindicate what Dave’s been saying all these years, that they just don’t make the world for tall people. That’s why he has so many divots in his head, and doesn’t like to fly. But there are many instances in which his height comes in handy. Not always; Dave has taken to stashing the toilet paper on top of the cabinet in the laundry room, a decision that’s going to come back and bite him in the butt one of these days, when I run through a roll and can’t replace it. But in general, when I need something off the top shelf, I stand under it pointing like a two-year-old, saying “ehh, ehh, ehh,” until he comes along to fetch things down for me. We call it using the “Extend-a-Dave.” I wouldn’t want anyone to think I think of him as just a tool, though, because I don’t. No, the Extend-a-Dave is my favorite tool–that, and the little orange-peeler dealie.

Dave is a tall man, and I am neither, and for some reason it’s a lot more entertaining to poke fun at the little person than it is to do the opposite. So I’ve been the recipient of quite a lot of friendly abuse for quite a while now. Mostly I take it in stride, however short a stride. Once or twice, no doubt due to a random hormone attack, I haven’t been in the mood. I told him during one of those episodes that I would appreciate it if he could lay off the short jokes for just a little while. He apologized with what seemed like genuine remorse, and then quietly said, after a few moments, “I thought most of those jokes were over your head anyway.”

If you’ll excuse me, I have a bit more digging to do.