Keep Your Democracy Handy By 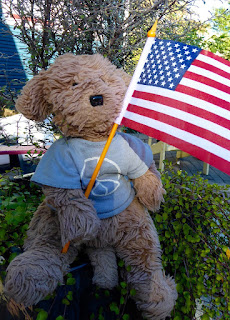 It’s a Down-East Maine colloquialism and I’ve adopted it for my own. I grew up in the metropolitan Washington D.C. area and we were short on colloquialisms. Nobody stayed put long enough to whomp up anything regional. There should’ve been a way to work dead ‘possums and Congressmen into the same phrase, but mostly we didn’t get too colorful.

“Handy by” just means “handy.” Like you’d want to keep your ice saw down cellah, handy by, in case a weasel gets frozen to your shed again. It only makes sense to keep things handy by. Right where you’d need them. That’s why, in your better households, you don’t keep your cheese by the toilet and your toilet paper in the fridge.

I’ve been able to instill good habits just by keeping things handy by. My dental health improved tremendously when I took the floss out of the bathroom and put it by my writing desk. I’m there a lot, and I’m not always visibly doing anything. There’s always time to floss.

So I was inspired last week when we got a call to arms. We are supposed to fire off postcards to our congressmen or call them on the phone.  They’re our servants: ideally, they should know what we think, and I’ve been meaning to get in the habit. Specifically, this time, it was suggested that because Presidential Advisatrix Kellyanne Conway didn’t think there was any “point” to the Women’s March, we should pop her a line to help her out.

Well, it was late at night, and I opened up a new word document, greased up the keyboard, and started hammering. Turns out that late at night and two beers in, I can get kind of loose and flingy with the verbiage. I’m not much of a phone person, but words I can do. I have lots of words. The best words. I have an entire armory of the little suckers and a bandolier in my brain and I’m capable, three beers in, of going fully-automatic, too. The keyboard started blazing.

When you start listing the reasons you’re resisting the new regime, it’s hard to stop. There’s the dismantling of the health care system and the attacks on reproductive rights and the beginnings of a new police state and the abandonment of NATO and the courting of Putin and the renewed dedication to a fossil fuel industry that should have been on the way out decades ago and the contempt for science and facts and the pussy grabbing and seriously what the hell is it with that hair and the dissemination of propaganda and the elevation of Nazis and the refusal to release tax returns and the attacks on the media and the toxic xenophobia and that America-First horse crap and the destruction of the environment and a president with the nuclear codes plus the disposition and self-control of a cranky infant and the racist dog whistling and the demonization of Muslims and just how did we manage to make Kim Jong-Un look statesmanlike already and the…

…momentary pause to fetch the fourth beer, back in the seat…still with me, Kellyanne, sugar?…And another thing…


Well. I have a tiny little .005 Micron art pen, but by the time you jam all that onto a postcard it looks more like a barcode. I ended up printing it out and folding it into a regular envelope proper and resolved to be more succinct the next time. 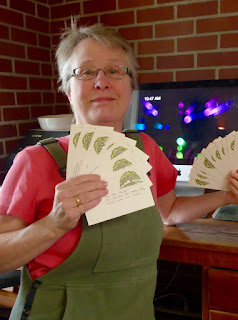 I’m under no illusions anyone is going to pluck my letter out of the pile and have a look, and then get on the horn and say hold off on that deregulation, Murr’s made a pretty good point here, but this is still our democracy and our public servants should hear from us. According to congressional staffers, written mail and phone calls really can have an effect. I have lots of beer and a full bandolier, and I can shoot words onto postcards all night long. Assuming I have postcards.

But I know how this works.  I might think about flossing my teeth ten times a day, but I won’t do it unless the floss is right there, handy by. And I can promise myself I’ll write to my congressmen (or, more likely, yours) but odds are it’s not going to happen unless I keep postcards. So I went to the post office. And I got a fistful of pre-stamped postcards, with lots of room on the back. And I put them in the drawer of my computer desk. I can hear them rustling about and squeaking “pick me, pick me!” They’re right there. Handy by. Ayuh.

You can do it too. Here are Ten Actions For The First Hundred Days.