The Key To Hoppiness 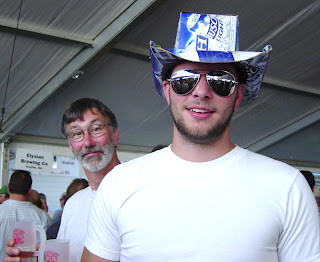 I didn’t even like beer until I lived in London. Then I liked the bejeezus out of it. It was purely a quality issue. As a post-adolescent with serious anxiety and maturity issues, I was perfectly willing to submit to an alcoholic oblivion. I just didn’t care for beer. But in London, lovely people everywhere served up pints of medicinal Guinness, with a head of fine froth you could finger your initials into, and still read them when the head hit the bottom of the glass. The servers grew ever lovelier by the pint.

When I came back to the states I was horrified to discover that the beer here was every bit as hideous as I had remembered it. The worst of all came from a company with a large number of Clydesdales on staff and they probably produced the product personally. The rest wasn’t much better. So I began to make my own beer.

When you make b 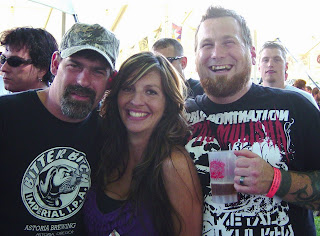 eer, not using an extract but with real grain and real hops, you get some interesting odors. Like that of many cheeses, it only smells good because you know what’s coming. One of the steps in making beer is called “sparging the wort,” and that was reason enough to do it right there–you could always tell people you needed to get home and sparge your wort. Generally they’d let that comment, and you, go without speculation.

I made several decent batches of beer and bottled them up, but soon after I’d gotten started in the venture, someone in town finally started making decent beer to sell. So I bought it. I put my pot, carboy and bottle-capper away. Then more people made more good beer. My little burg began to be known nationwide as “Beervana.”

Which brings us to our annual beer festival here in downtown Portland. That’s only six miles away, so we walked there. It seemed prudent. They sell you a little plastic mug and a bunch of tokens, each token good for a “taste”–four would get you the whole glass. We discovered early on that almost all the servers gave you a nice generous taste, certainly more than a quarter mug. Initially, that seemed like 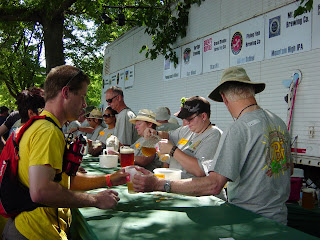 Periodically the whole frothing crowd would erupt in spontaneous whooing. All it took was one fellow with a good set of pipes to raise his mug and go “whoooo” and the whole crowd took it over. It was quite the demonstration of democracy in action, like a ballot initiative with everyone signing on. It was sort of inspiring and sort of frightening at the same time. Depending on my mood, it sounded like the song of a summer wind or the malignant battle cry of a sour Confederacy. I feel the same way about ballot initiatives.

Craft beer tends towards colorful names. I peered about the festival, finally focusing on a tap that said something like “Toad Suck Amber.” The fact that that sounded pretty good to me should probably have set off an alarm. But by the first dozen “tastes” I had had about the equivalent of five particularly alcoholic beers, and had begun to tilt. Beer is a healthy, natural food, I reasoned, 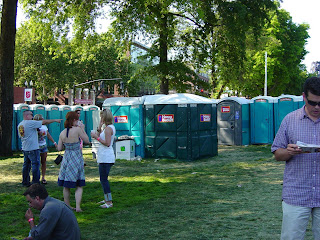 and I rationalized the next dozen tastes with the same logic a dieter uses to load up on salad, saturated in bleu cheese dressing and avocados and crusted over with bacon. I knew I had started with twenty-five tokens, and I tried to approach my condition logically, to do the math, which had become fuzzy. Twenty-five quarter-mugs, let’s see. After concentrating for about fifteen minutes, the only thing that was clear to me was that I’d need three more tokens to come up with a whole number. Having a genuine integer to work with seemed important to the calculation.

We walked home, I assume. I have pictures on my camera of things on the way back I don’t remember seeing, and can’t recognize, but we must have walked home. Because here we are.