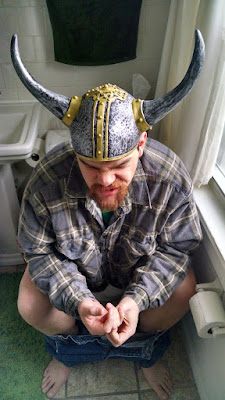 Be still, my churning colon. There is a fossilized Viking turd on display at the Jorvik Viking Centre in York, England. The Lloyd Bank Coprolite dates from the 9th century. People have studied it to determine various things about the donor. We all do that. We’re all at least a little interested in the provenance of our poop. Most of us aren’t set up to do a really good analysis, but sometimes we can recognize stuff. Besides corn–you don’t get any extra points for recognizing corn.

Anyway it was decided that this particular Viking did not have a particularly good diet. He seemed to be short on vegetables and fruit, for instance, even though it was clear that vegetables and fruit were available at the time. I think that is a little judgmental. Many of my own maternal relatives, all of whom are diluted Vikings, also disdained things that were not meat or potatoes. My Uncle Irvin, for example, was reputed never to have eaten a green vegetable or salad in all his years. Which numbered 85. Take that, Kale-Boy.

They further conclude that our Viking was constipated, because the turd was so large, both in length and girth. Judgey, judgey, judgey. This was a Viking, not a pansy-ass poop scientist. He probably dropped a dirigible like that once a day and twice on Thor’s Days.

We certainly have an interest in poop in this house. In fact, the only acceptable excuse for walking away from a conversation is “I have to poop.” Sometimes, if Dave is especially wrapped up in what he wants to say, and suspects my condition is not critical, he’ll follow me all the way to the bathroom and ask if I’m crowning. 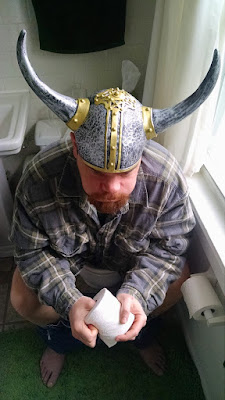 Veterinarians are also interested in poop, at least professionally. I remember following our dog Boomer around for hours waiting for her to produce a sample, until finally, finally, after I thought to take her to the neighbor’s yard, she grudgingly presented a sad, small, gray, chalky, brittle, sorry excuse for a turd, and I bagged it and took it to the vet. I suppose he was looking for tapeworms, but any worms she might have harbored would have been ground into flour by that thing. The vet was judgmental and annoyed. “What have you been feeding this animal? Bones?”


Well, excuse me. How should I know what she’s been eating? We worked off the same bag of kibble for her entire life. She didn’t care for it. This was a dog that was constantly on the front porch knocking at the door when we thought she was already inside. We’d let her in after she’d made her rounds of the neighborhood, and whatever she’d eaten wasn’t known to us except on the occasions she ralphed it up on the kitchen floor, but primarily, I believe, she favored meatloaf, biscuits, gravy, sausage, and beer. Possibly bones. Never had a sick day, either, but she did drop dead at 17, so there’s that.

At any rate, I see no reason anyone should be all tut-tutty about the diet of our friend Knute the Doot, who made his fine deposit under the future Lloyd’s Bank building twelve centuries ago. The day any of your shit lasts that long, get back to us.