Lallygagging For Fun And Profit 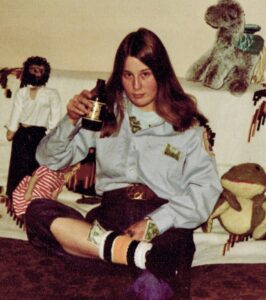 “Lallygagging around again, I see,” the old man said, no trace of a smile. I was late with the mail, and that’s what he always said on those occasions.

I gave him the benefit of the doubt that he was merely teasing and excellent at deadpan delivery. I mean, who says “lallygagging?”

I’ll tell you who. Sour old farts, is who.

Once it finally occurred to me that he truly was accusing me of malingering, even though I’d made quite the production of coming in the lobby drenched to the innards and bent under a mail sack that was bigger than I was, I let off steam in the next apartment building. Don was waiting for me there, as usual. I liked Don. He was an old guy too. He lived inside a fug of aftershave and cigar smoke that could drop a cockroach but he was friendly. “You’re late,” he observed.

“Yeah, I know. I just got accused of lallygagging.”

“Oh, I would never accuse you of lallygagging.” He puffed on his cigar and sent the smoke ineffectively out the side of his mouth. “I’d say you were fucking off.”

The thing is, in the old days, the arrival of the mail was a very important thing for a lot of people. Especially old people, who might look forward to the mailman as much as the mail itself. They interact with just a few people all day long, and some of those were on their soaps. Which means delivering people’s mail is only one function of the mail carrier. Another is to provide the punctuation point in their day. You, as a friendly representative of Big Postal, are the semi-colon by which they mark time; the time between Waiting For The Mail and Throwing Out The Mail And Going To Bed. If you’re very late, they get agitated. What if you don’t show up at all ? Does that mean they might not get to go to bed? What if they die first?

It’s an old-fashioned story. It’s a story of when people anticipated their mail, each day presenting itself like a new lottery ticket, with most days full of Publisher’s Clearing House and bills and grocery coupons, but with always the possibility of some jewel of a hand-written letter or an unexpected refund check. It’s a story in which the mailman is a cherished figure and maybe a source of cheer, or the one person who will notice if you have fallen and you can’t get up. It’s a story of time and the regular march of it, a thing you can count on.

Also, people used to smoke cigars right inside a building and nobody thought a thing of it. That’s how old this story is.

Bless their hearts. And they’ve never gotten anything interesting in the mail.