The Laws Of Distraction 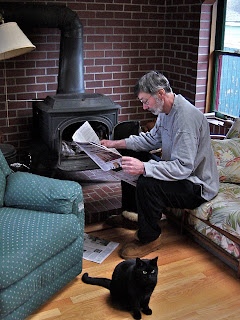 “How about a fire?” Dave says, heading for the woodstove, and I smile, knowing I’ll be toasty warm in–oh, forty-five minutes to an hour. The wood is already in, and the kindling chopped. Where everything jams up is the newspaper-crumbling. There is no sheet of newspaper, which Dave has theoretically already read, on which he cannot find something new to pique his interest. There’s someone in the obituaries named Gladys who was only twenty-one; some guy thinks he can get a half-mil for the crappy store-front down the street; the entire east coast is graphically covered in raindrops. I get up and put on a sweater, and return to find out that Safeway is selling Fuji apples for 89 cents a pound, and it’s still cold in the kitchen. We call this “reading the fire.”

Both of us read the fire all day long. We launch into conversation with a particular point in mind, but something shiny will pop up to alter the trajectory, and our dialog lurches around until it founders in unfamiliar territory.
“I’m heading over to the hardware store…”
“The one on Fremont? Did you see that huge backhoe on 35th?”
“I think it’s sewer work. Oh man, did I tell you? Kent’s got rats again. Size of cocker spaniels.”
“Don’t forget to save those dog poop bags for Margo’s.”
By the time we’ve “read the fire” all the way into the subject of plastic pollution, the sorry state of plankton, and the fact we need to get a new crabbing license, we have no idea what we might have needed at the hardware store. We can guess all day and never get warm.

Personally, I can crumple newspaper like nobody’s business, but I can’t look up anything in the dictionary without reading the fire. It’s not the worst thing. It’s how I tripped over the word “steatopygia,” meaning an excessive accumulation of fat on the buttocks. Tell me that isn’t going to come in handy.
There are renowned writers who are accomplished fire-readers. James Michener, for instance, starts his books right around page 200, and then starts backing away. He’s got someone sitting under a tree and fixin’ to stir up the plot, and then he gets sidelined by the tree, and its history, and the contributions of the minerals in the soil, and the 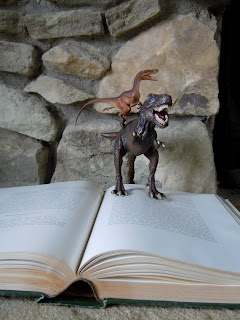 composition of the substrate, and the geological record of upheaval, and the deposition of dinosaur poop, until he’s backed himself right up to the Triassic in the preface. What makes him a renowned writer is he can eventually find his way back to the guy under the tree and finally start going a little forwarder. Whereas if I had tried to steer a novel that way, I’d have ended up in a ditch clutching a treatise on Wing Development in the Cretaceous.
Reading the fire is not the quickest way to do anything. But there’s nothing like it if you want to call someone a fat-ass without their knowing it.
By Murr Brewster|2021-11-09T21:28:31-08:00May 22, 2010|Uncategorized|27 Comments