Learning To Write From Chopin 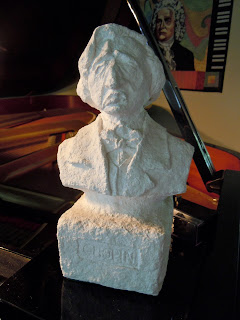 When I was a kid, I figured Chopin was just mean. It seemed like enough of an imposition on my new skills to load up the key signature with flats and sharps, but then, just to mess with me, he’d flat the flats and sharp the sharps so that the page looked like it was all croutons and no soup. I took it personally. “If he wants me to play an E natural,” I whined, “why doesn’t he write that instead of making it a double-flatted F sharp?” People get mad when they feel stupid. Which, of course, is kind of stupid.

Well, you get over it. You grow and sharpen yourself up and realize that Chopin liked to hover and flit and dip on the black keys, which are actually easier to play, and was, if not affectionate, not overtly hostile to you at all. But he had eccentricities, and those became your problem. It’s one thing to learn how to play three notes in the right hand to every two in the left. Or eight to six; or some other mathematically comprehensible challenge. You can get the hang of that pretty fast. Chopin likes to lull you into complacency and then slide in eleven notes in the right to six in the left. Then in the next measure, twenty-one notes in the right to the same six in the left. Or pi. Or some other thing with no gazintas in it. It’s irksome. Everything’s going along great and then all of a sudden a bazillion little notes flock in like birds on a wire, and you have to somehow jam the whole chirping mass into a little box without losing any. 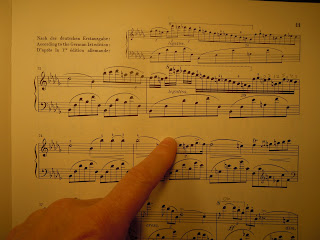 First thing you try is to figure out roughly where some of the notes should line up, but it won’t work. They won’t go. The only way you can do it is to allow part of your mind to come loose. At first it’s like a race, and your left hand keeps winning. But finally in one blessed moment of grace your mind lets go and quits trying to make sense of the thing, and there it is, your 21 notes flapping into the sky and back again, and that much more beautiful because Chopin has taken away your sense of control over the music. He’s going to slay you with unpredicted beauty.

That moment when it falls into place is exquisite, like a miniature enlightenment, when you allow your mind to court chaos. It’s like looking at those 3-D dot-pictures until something gives way and the image assembles and looms, and you can’t imagine not being able to see it. It’s a little surrender, containing its own relief. And it’s something that gets easier with practice. In fact, my problem is not in letting part of my mind come unstrung but in keeping the whole damn thing from kiting away. I want all parts back together and home in time for dinner. I had to quit smoking pot years ago because I couldn’t trust my mind not to stay out all night. It’s a worry.

So for some things, a supple mind trumps a sharp one. The ability to play a screwy passage in Chopin is the same ability that makes writing possible, when it’s done right. A writer stretching her thought-muscles tends to look, to an observer, a little distant and dim. But that’s the price you pay for metaphor. If I want to describe something by means of something else, I have to cut my mind loose to bob about in experience and sensation until something chinks into place, and when it’s right you can just about hear it snap together. You can’t force it. I once read an article about writing in which the author said “writing humor is tough. It’s as tough as a chicken-fried steak,” thus making her own point. She wasn’t cutting her mind loose. She was playing Family Feud. “Things that are tough: Survey SAYS?” Bong! Here are your top five answers, including Chicken-Fried Steak. Pick one and stick it in your sentence.

It’s the difference between plunking a pigeon with a shotgun and sending a falcon out after it. The falcon will return to you, but you don’t know where it’s going. You gotta trust the falcon.

No point in trusting the falconer, though. She may be nodding in all the right places, but she looks a little distant and dim, and probably hasn’t heard a word you said.