The Light Of Friendship 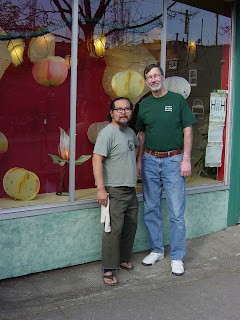 You might want to jot this down: if you give a man unfettered access to your lemon cucumber vine, you could get a dead frog sconce out of it.

Dave and I like to visit our local artists hereabouts, and it was on an auspicious day several years ago, visiting Lam Quang at his HiiH studio around the corner where he sculpts light into wax shades, that Dave happened onto the original dead frog sconce. He was thunderstruck, positively rooted to the floor, and pointing. “Must…have…” he droned, fumbling for cash. The item in question was glowing from the walls of the studio, the bulb inside backlighting a sheet of wax with a flattened frog in it. It was a frog rampant: a jubilant amphibian, cut down at the moment of purest joy, one arm outstretched and legs marching. It looked as though it had only just put down its bugle and pennant. Once one was able to get over the obvious fact of its death and recognize that it had been a quick one, at that, it was possible to embrace the sconce. Dave did,with all his heart. Lam was not going to part with it. He was not in the habit of retrieving dead amphibians and this one had been serendipitous. He plain liked it, himself. We left the studio.
Months later, Dave came down the alley bearing a hot pizza and Lam’s head swung towards it as though it were true north. He had been shooting hoops. “I’ll play you a game for that pizza,” he offered. “Play you for your frog sconce,” Dave countered. “Deal,” said the apparently starving artist, but Dave withdrew the challenge. He did not suck at basketball, and he was well over a foot taller. He was not about to unfairly wax his friend just to score his beloved artwork. I smiled to myself. I haven’t seen Lam play, but any time a man my height challenges someone like Dave to a game of basketball, I figure he’s got some serious skills. I sensed a hustle. But we shall never know. 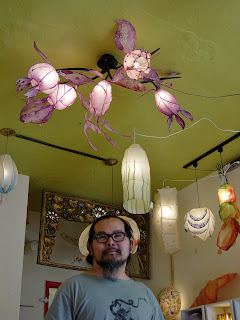 This is how a lot of things get done around this neighborhood, and a lot of things get done around this neighborhood. You won’t necessarily see much money change hands. There may not be much of that to go around. Gayle, across the alley, benefits from Dave’s abilities on a regular basis. Shrubs get whacked back, trees felled, stuff gets taken to the dump, rides to the doctor are provided. At least as often, something comes back across the alley. A large platter of deviled eggs and radishes made it over here one day, unexpectedly, and Dave seemed lit from within. His worship of deviled eggs and radishes knows no bounds, and had only intensified when I informed him that his radish burps smelled like farts. “How did you know?” I asked Gayle, who wiped her hands on her apron and drawled, “I know how to please a man.” Man Exhibit A had already drifted away with the platter like a cartoon dog undulating through the air on a sine-wave of pie fumes.
So we have more vegetables and fruit than we are inclined to harvest, and when Lam showed a particular fondness for the lemon cucumbers, we told him to help himself anytime. He came by to graze raspberries and chomp away at the cucumbers. A few seasons may have gone by in this way before he showed up at the back door with a newly created dead frog sconce for Dave. I will not say no frog was harmed, but it was certainly not harmed in the making of the sconce. It had already been thoroughly Buicked and peeled off the pavement. And someone had seen it, and his first thought was: Dave. 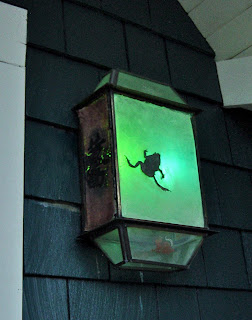 I don’t know if people do these sorts of things for each other in the gated communities. The houses seem so self-contained and far away from each other, excreting their occupants in metal pellets out the driveway and away. Maybe people aren’t so willing to part with stuff. That’s what makes them rich.
This is what makes us rich.
By Murr Brewster|2021-11-09T21:29:23-08:00April 21, 2010|Uncategorized|32 Comments