The Lock Of Love Is In My Eyes 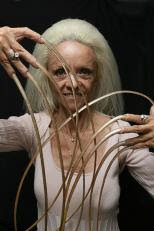 Horrible story. Sixty-eight-year-old lady, name of Lee Redmond, was in a terrible high-speed accident and was thrown clear of her SUV. Tragedy ensued. She broke her fingernails.

She was a world-record holder; each nail was nearly a yard long. In the pictures, she looked like a neatly coiffed giant sloth. There’s an interview with her on the web, right next to an ad for fingernail polish, although I think someone missed a bet by not advertising one of those Japanese toilets that do everything but read you the paper. 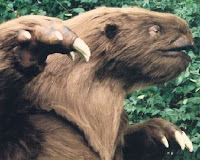 look at the pictures of her “before,” it’s hard not to immediately come up with some everyday tasks that would be just about impossible with those giant claws. That’s right–there’s no way she’s ever going to be able to pull off those arpeggios in the Chopin C-minor Etude. In fact, the entire enterprise of nail-growing seems like a pain in the ass. Nevertheless, although she admits that life after the accident got a lot easier in many ways, she was never tempted, in thirty years, to do away with them. These sorts of ventures get a life of their own, becoming their own justification. I think of it as the Vietnam Escalation syndrome. If you’ve already lost twenty-eight thousand “boys” over there, the case could be made that it’s time to wrap things up and bring everybody ho

me. But that’s not the way people reason. If we don’t sacrifice twenty-eight thousand more, the first batch will have died in vain. Same exact thing with fingernails. You’re thirty years into the thing, you’re not going to stop no matter what.

I know how she and Lyndon Johnson felt. I can’t cut my hair off. My hair is totally annoying to me, but I’ve got too much time invested in it. I could cut it off and give the strands to the Locks of Love to be made into wigs for bald children. For that matter, Locks of Love could probably do fine work with one or two weeks’ floor sweepings. My hair is all over the place. It’s on the floor, it’s on the carpet, it’s turning into felt in the folds of my recliner. It clumps up and bounds across the bathroom floor like tumbleweeds.

The vacuum cleaner is gagging, and wants to know if John Deere makes anything for the home-appliance market that could roll the stuff into bales. Rogue strands sail silently through the air looking fo 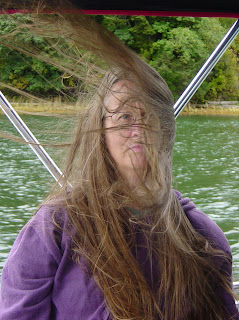 r casseroles to hole up in. The drain in the shower has begun to make that same sustained horking sound that usually precedes the cat getting punted off the bed. The native dust bunny population, cowering under the furniture, is in danger of being overrun.

Some strands never even quite make it off the mainland. I routinely extract hair out of crevices on myself that they didn’t originate in, and that I wasn’t planning to floss anytime soon. These are likely to be a deal-breaker for Locks of Love.

I know I’ll be happier just as soon as I whack it off into the thin, sensible old-lady Prince Valiant bob it wants to be. But unless I have a serious mishap with my bicycle and a nearby weed whacker, I may never get around to it.