Look Out! It’s A Cycle Path! 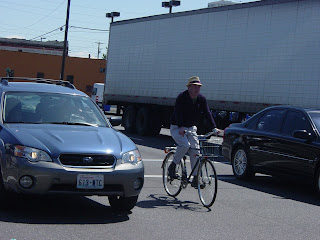 Well, you have to go back to physics class to truly understand bike lanes. Not the comprehensible kind of Newtonian physics from your childhood, either, but the newer bits, the kind that if you claim to understand it, it proves you don’t. When I was a child, science was a snap. We just had those neat little atoms all over the place. The Russians had launched a crappy little satellite, by today’s standards, and suddenly everything was all about the atom. You saw pictures of them everywhere. Nuclei with electrons whizzing predictably about them. They were so tidy. Tennis ball in the center, ping pong balls on wire hoops.

Then it turned out that you couldn’t really represent the atom with a tennis ball and wire hoops after all. The electrons didn’t really travel on wire hoops. All that the purported path of the electron could represent was the probability that the electron would be right about there, or maybe in the next block, or halfway through the world, or sometime next week. But only if you weren’t looking at it. I believe that sums up the new physics. It’s not tidy at all.

But it does help to understand bike lanes.

A painted bike lane represents the probability that a bike will be encountered somewhere in its vicinity, or possibly two lanes over, or parked in the garage, or on your windshield. It just narrows things down a little.

Count me in favor of bike lanes. As a biker, I find them at least symbolic of some sort of bicycle legitimacy on the road. They’re as effective at keeping me in one piece as my marching sign (“Whoa, cowboy!”) was in keeping us out of the war in Iraq, but at least they’re something. My preference wo 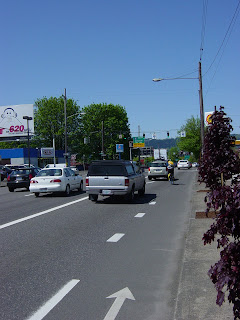 uld be for bike paths that looked more like the broad top of the Great Wall of
China, with the automobile traffic dashing about below. As it is, it’s still too easy to imagine ending up as a damp smear in the bike lane, surrounded by medics with spatulas and baggies.

For instance, in one high-traffic area on the approach to the Lloyd Center Mall here in Portland, the bike lane ambles peaceably on the far right and then vanishes abruptly, only to reappear one lane over, a transition marked by a faint line of hyphens. “Look, Harold, hyphens,” a passenger might say to a driver, and Harold would query “hyphens?” just before hearing a thwack and turning his windshield wipers on high. We bikers negotiate these transitions, cringing and praying: be nice. Be sober. Be looking. And then we pedal on, cars whizzing by to our left and our right, secure in our bike lanes and thinking: You can’t hurt me. I’m enclosed by road stripes.

The road to the Lloyd Center might be paved with good intentions, but it’s still hell.