Lost In The Music 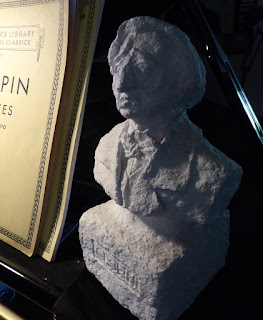 I had to pick out a relatively easy piece. I only had a month and a half to learn it. That should be adequate time for a lot of the classic canon but not the way I do it (five minutes every third day until two weeks before performance). Several Chopin waltzes fit the bill and I picked one out and started hacking away.

Plenty playable if you could tell what the notes are, but that seems to be a closely-held secret. This one is in the key of Doesn’t Matter, because he plans to change keys every half page or so (in musical terms, “on a whim”). And not necessarily from the major to the relative minor, which would be a sensible thing to do if you simply must mix it up. That’s something we’re used to. You start out sunny and then slide into the relative minor to demonstrate depth of character. It shows you are capable of entertaining morose thoughts without fear and redeeming yourself and humanity later. Or the other way around, if you prefer to be thought of as complicated and dark. Sometimes he lurches from E major to A flat minor and straight into the Spanish Inquisition, which nobody expects.

There’s something about Chopin’s key changes that makes me suspect he did it whenever he was warding off a seizure.

So there we are putzing along in some respectable key and building toward some kind of climax and all of a sudden we have slid into an entirely unrelated trough of a key and there’s no clambering out. And after two or three measures, when he thinks you’ve recovered and can find your way around, he starts heaving in accidentals. (An accidental is a note that is not a member in good standing of the most recently applied scale. And they are called accidentals because we don’t know if the composer meant to do that.) There are double-sharps and double-flats and other such things to trip over in the dark. The goal here is to make sure that none of the notes in the score appear at first glance to correspond to the ones he wants you to play.

And then he puts in some note–some individual note–that bears so little relation to any of the other notes on the page that you have to study it sideways. You check the history of recent key changes searching for clues to its true paternity, and conclude, ultimately, it really is D double-flat natural (“K,” or “bastard”). 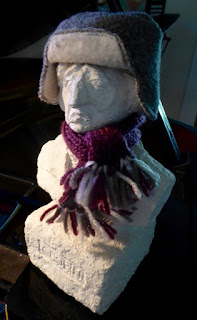 Yes, he really does want you to play that note that sounds perfectly horrible with all the other notes. And he’s a right genius to do so. But you won’t know that until you get the sucker up to speed and the note is just a fleeting thing, passing quickly, leaving behind an almost imperceptible but rewarding jarring of the senses. His accidental has become incidental. It’s a drive-by.

When I was young, Chopin used to drive me crazy. I’d struggle with every note making sure I had the right one and not just something in the vicinity. I thought he wrote like that just to piss me off. Now I’m a better reader and don’t take it so personally. I even appreciate him. I’ve already outlived him by 26 years, poor guy. I don’t know that they’ve really pinned down what did him in. Consumption, probably, with adult onset preciousness and flare-ups of artistic temperament, but we can’t rule out homicide.