Love Is In The Water 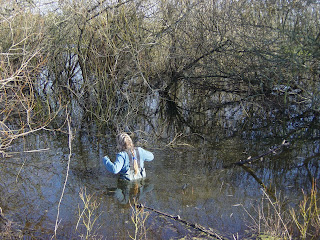 It’s the middle of February, which can only mean one thing around here: it’s time to jump into a cold swamp up to our nipples and look for evidence of amphibian romance. Yes, Team Brewster is once again gearing up to monitor egg masses of frogs and salamanders for the regional government entity in charge of wetlands. They won’t know how good a job they’re doing until we come back with some hard data. It’s not always comfortable out there, but one neat thing about being immersed in a cold swamp is you barely notice the stiff winter winds.

Sadly, Team Brewster has lost half its members. Elizabeth, who keeps an overcoat on when she visits us, even if we have the heat jacked up to ninety for her, bailed out this year. Even after I offered helpful suggestions. “Quit falling in,” I told her, but she was unmoved. I’ll miss her, but there’s a lot to be said for diversifying the gene pool a little bit. Brewsters have their good qualities, but none of them are all that useful. We’re great at showing up, and tipping over, but don’t look to us for direction. There have been Brewsters in this country a long time; the starter set barreled over on the Mayflower full of righteous fire and not much else, watched everybody drop dead the first winter, and had barely enough gas left over to procreate. Now, nine or ten generations later, we’re still a sparse population of, shall we say, unusual intellects. 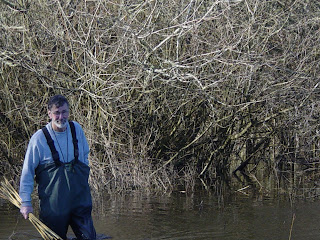 Fortunately, Dave has stepped up. Among his other fine traits, Dave does not confine his activities to the sensible. Plus, he has much higher nipples. He proved to be a natural right off the bat. I told him to look for egg masses that look like oranges (Northwestern salamander) or grapefruit-sized tapioca (red-legged frog), and, attuned to all things edible, he homed in on some right away. Everything stops at this point while we write down our data and flag the eggs. Elizabeth and I had trouble with this, juggling a clipboard, several markers, a spoon (don’t ask), tape, a stopwatch, and a large bundle of bamboo sticks. It was always an ordeal. Dave starts right out by laying the bundle of bamboo sticks on the water.
“Bamboo sticks float?” I said. Well, don’t that beat all.
Minutes later, he was working his problem-solving skills again, when he tried to determine if his waders leaked by farting in them and looking for bubbles. The man complains that his cognitive powers are slipping, but he has a long way to slide before he gets to the Brewster mental terrain.
Last year, our assigned patch of wetland was barely manageable for two monitors. It was a lot of territory. This year, same location, Walden Pond had been replaced by Lake Michigan. We’re going to be at this a while, I thought. Meanwhile, Dave was hard at work.
“Whoa,” he said, bending over.
“You got eggs?”
Dave nearly had his nose in the water. “Pretty soon,” he said.
Whereupon he reached in and scooped out a pair of rough-skinned newts, locked in embrace. “Dude,” you could almost hear them saying, but nobody was letting go of anything. The female was smaller and had the standard grainy skin texture, and the male was so engorged–all over, 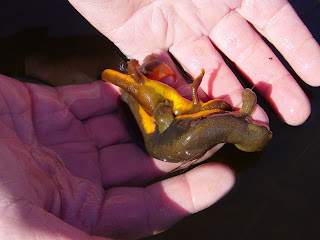 mind you–he’d gone smooth. They can remain clasped together for hours or days, and sometimes a whole group of them are tangled together. It’s called a mating ball–which isn’t what we used to call it back in college, but we might as well have. We started to see them everywhere. We haven’t logged too many egg masses yet, but there’s romance in the air. It doesn’t look like these guys are giving anything up for Lent.
It’s still Muddy Gras in the old town tonight.
By Murr Brewster|2021-11-09T21:30:21-08:00February 24, 2010|Uncategorized|13 Comments