Loved Ones, With A Side Of Lefse 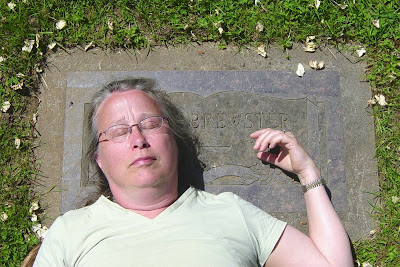 There is a perennial ad in the obituary section of the newspaper for “funeral alternatives.” I’m always drawn to that, since I consider every day to be a funeral alternative of a sort, and I’d like to keep that up. Turns out there are a number of different ways to dispose of a corpse, beyond the traditional methods of embalming and burial, cremation, and concrete boots.

You have that option of being shot out into space, which is nice if you want your legacy to be “I could have rid the world of malaria, but I thought it would be more fun to be shot out into space.” Or, in another option available to those with wealth afflictions, you could be frozen cryogenically and thawed out when a cure for your terminal illness is discovered. I always imagine that departed soul floating around quite peacefully, maybe shivering a bit, but happy enough, and then being yanked back into a world of chemo and woe.

There are other possibilities. I am informed that the state of Oregon is considering regulation of a number of new “death care consultants.” Among the alternatives out there is the practice of freeze-drying a corpse and turning it into a fine powder, drying it, and putting it into a potato muffin. That would be just the ticket if you want to take your loved one camping. Oh wait, that’s potato coffin. Still.

And there are a number of companies in the business of dissolving bodies into a sort of soapy goo. They’re calling this “resomation,” but you can’t fool me–I’m half Norwegian. That’s lutefisk.

If I absolutely did have to choose for myself, I guess I’d want to be tossed into a peat bog. A body buried in a peat bog barely deteriorates at all. Thousand-year-old corpses have been unbogged and found to look like they’re just a little tired, maybe just a little squashed up. That’s how I look first thing in the morning already.

But for the record, if I go before you all do, please note that I do not care what you do with me. As long as I’m still topside I would like to be fed and watered regularly but after that it’s going to be entirely up to you. I do think it’s a nice touch to be an organ donor. Even skin is harvestable, and there are parts of me that could cover a lot of territory. My eyes probably wouldn’t be worth much, except as a novelty to the far-sighted. I’ve got two perfectly serviceable kidneys. My liver is heroic. Three people could get new chins.