Making Up For Rain 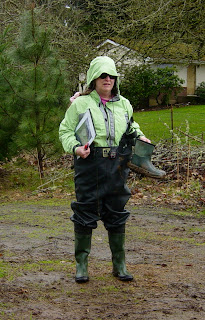 Every Friday the newspaper has a feature on fashion! and style! that I always look at so that I can discover new regions of personal inadequacy, and then ignore them. Frequently they depict a few oddly-dressed people and point out how something–a scarf, a hat, a jutted hip–has “pulled their look together.” Which is precisely my problem: my look is always coming unstrung.

I think they missed their market on the current article. Some editor on a deadline was given the job of coming up with an article suitable for the Pacific Northwest and she probably typed in “rain” and “style” and lassoed up an AP piece on looking your best when (God forbid) it’s raining. Rain is explained as a bizarre meteorological phenomenon whose main function is to mess up one’s look. “The key to looking your best when it does rain is taking a relaxed attitude. Don’t try a complicated hairstyle or a dramatic smoky eye,” the article cautions. No doubt someone at the paper, a newcomer who can’t wait to make it big at the LA Times, thought this feature would be of service to the locals. If the editor  had typed in “rain” and “style” plus “people who give a rat’s ass in Portland,” she would have gotten zero hits. “The important thing,” the piece goes on, “is to make your look seem purposeful, and not like you were caught off-guard.” The concept of being caught off-guard by the rain in Portland is never explained. 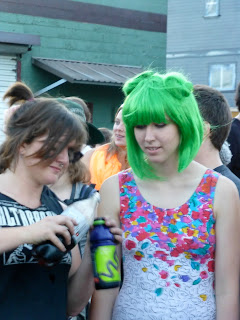 But the article recommends going with tousled hair rather than a manicured, sleek style.

So it’s recommending pre-tousling in a post-tousled town. I’ve lived here for 37 years and I haven’t met one person who worries about what the rain will do to her style. Anyone who does got off the train too early. We all know just what each other looks like wet. We’re way over it. The article recommends using special oily products on your hair to repel water. What we see a lot of here is your dreadlocks, constructed of a mixture of the person’s own rooted hair and his or her former hair that is trying to fall out and keeps getting snagged up, and also some hay, all held together with secretions from various burrowing animals, and plenty of people find that repellent enough.

If an entrepreneur was inclined to “do something about” the weather, it’s possible he could get some traction with a waterproof bicycle shoe with pedal cleats that can transform into a short, kicky heel, but probably not. This is not a vain populace. We’ve got two types: people with bicycle fenders, and people with muddy stripes up their backs. And most of the latter types, if they think about it at all, assume the muddy stripe has a slimming effect. We are just not this fussy. I’m probably a good example. I don’t think much about my style until I go into Nordstrom’s, and then I feel 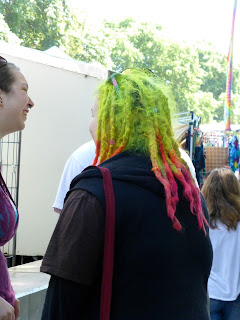 inadequate because I don’t have any clothes to wear that are good enough to shop at Nordstrom’s in, so I wear my bike helmet into the store as an explanation.

Telling us what kind of foundation to put on so it doesn’t streak or clump in the rain is like trying to sell a high-altitude cookbook to a marmot. Even if he did think alpine penstemons would be even nicer in a coffee-cake, he doesn’t have the manual dexterity to pull it off. And we might give the latest style a passing glance, but we don’t have the inclination to pull it together.