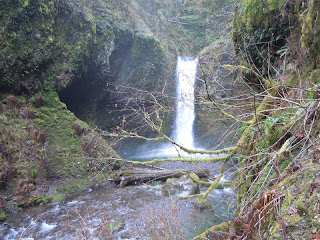 The beauty part is, we can always blame Elizabeth. We’re good hikers but we need that initial punt in the heinie, and our niece is a grade-A heinie-punter. She’s the pull-cord for our two-stroke engine. So she’s the one that suggested we go for a waterfall hike in the gorge in March. The Columbia Gorge hikes all have a lot in common: they’re green, full of waterfalls, and straight up. That’s a package deal. They’re green from all the water. They’re waterfally from all the upness. If you start walking in the Gorge, you can’t get very far without starting to climb. And once you start to climb, it’s hard to finish, because there’s always more up. Devil’s Rest, at least, seemed to have an end point. Nothing about the name warned us off. Everyone likes rest. 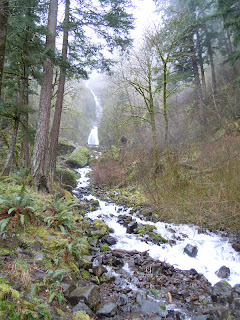 And because the Gorge has so much Up in it, you can run through several latitudes and months in one day hike. You can start at the bottom in September with the happy woodland critters, and emerge a mile up in January, eyes peeled for trampling caribou. Elizabeth promised we’d stop when we hit snow. We were only going to gain a half mile elevation on this  hike, but we’re not in our summer shape, and we got warm right away. “Can’t believe people won’t hike in the rain,” we said to each other, too smug. “Look how beautiful it is. We should’ve worn shorts and a T-shirt,” we said, too snug, unzipping everything we had on.

The snow appears abruptly when you’re hiking uphill. First you round the bend and see a little starter patch. Then more and more patches, until they coalesce into a snowfield with intermittent mudslides. The weather personages had forecast light rain, and sure enough there was a whole ton of light rain up there. Nearby trees began to disappear. After a few miles, the first viewpoint presented itself as a wide spot with a sheer dropoff, beyond which squatted a cloudbank thick enough to break your fall. It was magnificent: somewhere below us stretched the majesty of the mighty Columbia churning through the basalt. Or, the shimmering pink sands of Waaka Waaka where the plumious frondle-trees waved in the breeze and tiny pocket monkeys played castanets and dropped petals in our Margaritas. Could have been either, it was hard to tell. We stepped away from the edge and kept shlorping uphill through the snow and mud. Devil’s Rest was a view-free bunch of boulders in the forest at a point high enough to funnel a gusting wind in our direction. There was a break in the light rain, in the sense that it was now coming at us sideways. We zipped up, hunched over our sandwiches, and speculated about the freezing point of mayonnaise. 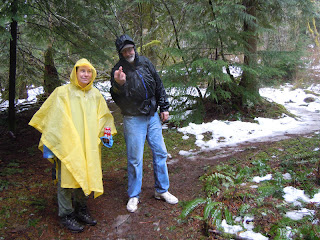 Dave, through clenched teeth, sent out something about Elizabeth and me being entirely too gung ho. There was something about a ho, anyway. I mentioned that the guide book said there was a different way down, conceivably through Tahiti, and that we should be able to make out signs. We peered through the fog and finally noticed signs of hypothermia, and went down the way we came, with the mighty Columbia rumbling below and Dave grumbling behind. Periodically the snow, mud, and downward momentum sent him ricocheting down the trail and into a voluntary face plant on a Douglas fir to stop his slide: shluck shluck shluck SHLOOOORP bink-bink-bink-bink-BAM. Ha ha! Funny Dave!

“I thought,” he said tightly, peeling bark from his beard, “we were going to stop when we hit snow.”

Elizabeth explained. Usually, when we hit snow, it’s passable for a while, and then it suddenly gets too deep to traverse, and that’s when we were going to turn back. This snow, however, had remained thin, albeit slick. “So,” Dave said, “what you meant was, we would go until the snow was in fact impassable, and at that point we would not continue passing. We would not, as you say, violate any laws of physics. Is that it?” Shluck shluck shluck SHLOOOORP bink-bink-bink-bink-BAM.

“Right,” Elizabeth said. “You okay?” she called down. 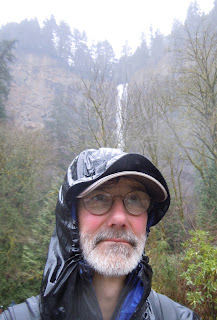 He was probably okay. He didn’t say much the rest of the way down. We got to the car and cranked up the heater until we’d knocked the rime off the interior of our cell walls. “That was great!” Elizabeth chirped when her larynx thawed out. “It’ll be even better next time,” she said, poking Dave until he seized her by the poker.