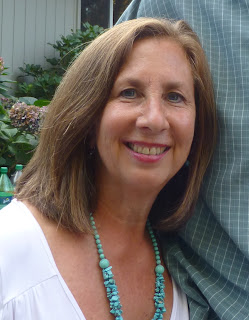 My first sturdy memory of Gina was from a softball game. She wasn’t any bigger than I was–in fact we were built on just about the same general template–but unlike me, she had skills. We’d worked in the same post office for a year by then, and we’d gone to a game with another station that pretended to be casual but, in fact, was not: a keg of beer was at stake. A towering fly ball was hit to the outfield and Gina began streaking across the field yelling I got it I got it I got it and she was darn close, too. Then there was a terribly loud thudding sound that none of us could make any sense of, because we had never heard a collision between a swiftly moving bosom and a light pole before. Gina was on the ground. I hope she had the ball in her mitt, but I can’t remember. Nobody could figure out what the hell a light pole was doing in center field. She shook it off and was soon diagnosed as good enough for postal work, but really she was always a lot better than that.

Years followed in which Gina and I held ostensibly the same job (letter carrier), but she was a fixture in the downtown business core, and I hoofed around up in the residential area in the hills.  Our postal paths never crossed. But they might as well have, because we were constantly being mistaken for each other. We both had dark honey-colored hair, we were short, we were female. At the time female letter carriers were a novelty. Any time our customers saw us out of context, they would start chatting away. 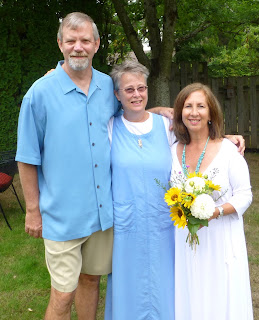 If I didn’t recognize the person talking to me, I’d be a little off-balance at first and then relax. “He thinks he’s talking to Gina,” I’d surmise. She had the same experience. Since we knew each other’s life stories, it was just as easy to play along as if we were the other person rather than to correct and possibly embarrass the person we were talking to. “Talked to one of your fans today,” we’d say to each other. This went on for thirty years. I didn’t mind being mistaken for Gina, because she was an ace. I hope she felt the same about me.

Gina became a mother, a really good one, and then went for two because the first one turned out so nice, and much later she divorced. If you had told me, in 1979, that I would marry Gina, I would have thought you were nuts. I was plenty on board for the possibility of gay marriage some day, but as much as we resembled each other, we weren’t each other’s type. Our types mostly have penises. Nevertheless it happened. Gina reconnected with a fine man she had dated early on, and Kevin and she were married last week, with the Reverend Murr officiating.

I picked up my official status as the Marrying Kind last year when my friends Beth and Dean requested my assistance. It was a matter of an exchange of emails to obtain my license as a minister of the Universal Life Church (creed: “whatever”). It’s an odd thing. The state of Oregon sort of cares who officiates, and sort of doesn’t. You can be a judge, or you can be a mail-order minister. I’m not sure why you can’t just be a librarian, or a letter carrier. People tend to go on and on about the holiness of the state of matrimony, but ultimately it’s just a legal arrangement. It confers upon the couple a defined set of benefits that serves as a short way

around what would otherwise be a daunting legal maze. Some of them are major. You can receive each other’s Social Security benefits. Pensions. Health benefits. The holiness of the marriage is something 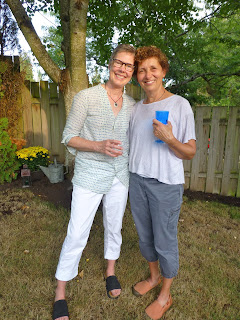 else altogether. Whatever love has to do with it, it would do with or without the legal sanction. We are thrilled to celebrate the triumph of affection and the willingness of two people to care for each other. But they don’t need us for that.

They can have that in any case. It’s up to them. But the benefits–they need my decidedly secular signature on the marriage certificate for that. I have other friends whose love is neither negotiable nor subject to anyone else’s approval.They got it, they got it, they got it. But right now in the state of Oregon they cannot be legally wed. Something is stopping them from that, something that makes as much sense as a light pole in the middle of center field. Next year, in 2014, we’re going to take down that pole. I’m sure of it. I’ll still have my license, if anyone needs it.