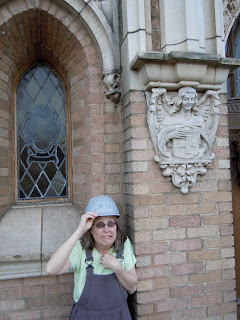 I was in a Catholic church the other day, helping nudge a good woman towards heaven. It’s only the second time I’ve been to a mass. I got to see stuff I’d only heard about–spraying holy water, swinging incense, throwing gang signs, etc. There’s a lot of magic going on there, and I thought it prudent to hang back in the corner of the last pew in case someone got tipped off and flang me a thunderbolt. I’m the farthest thing from a magical thinker you can be and still talk to stuffed animals.

There were altar boys and some altar girls. They had a lot to do, toting around this and that. And there were two priests, and there was a fifth person, a young woman, all done up in white and just sitting in the center with no discernible function. I began to worry she might be the human sacrifice. I might not be up-to-date. 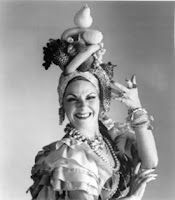 I think the Catholic Church owns the most magic of all the human institutions, and that includes voodoo. One way to tell is by the hats. The Pope has the biggest hat of anybody, a regular funnel from on high. It’s very impressive–his entire outfit is, right down to the red shoes. Remember the Bhagwan Shree Rajneesh? His followers were silly people, but I can see how they’d be drawn to his cool clothes and hat. It’s hard not to be moved by it, even for an apatheist like me. I know when I’m in psychic doubt, I ask myself, “what would Carmen Miranda do?”

There was no good reason for me to feel spooked by being in a Catholic church, but I was a little intimidated. This was a place you could get into mortal trouble just by thinking about stuff. Most of the stuff I think about at my age shouldn’t get me into hell, but someplace seedy for sure. I grew up a Lutheran and we had a lot of trappings too. We sang a lot of hymns, and we all knew the liturgy. So I’m used to ceremony. But we didn’t get into a lot of guilt. Our crosses were scrubbed clean of gore. We sang, and responded, and listened to sermons about loving our neighbors, and then we went down to the basement and had coffee. 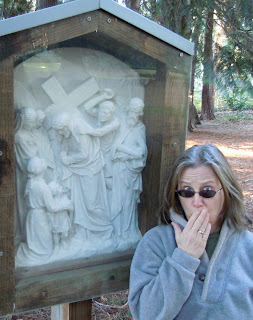 Towards the end of this mass we were supposed to share the peace. I’m familiar with that practice from the last days of my Lutheran upbringing, and it was a crummy idea even then. That’s the part where you’re supposed to turn to the people around you and shake their hands and make nice. Right there in church. God had always been fine with us just doing that in the basement over coffee, but you can’t stop progress.  That was also the era when we started playing guitars in church to be relevant, even though we had a massive pipe organ and plenty of lightly-used Bach. Oh no, now we teenagers are sitting on the steps to the altar twanging away and singing “Suzanne” even though it talks about “touching her perfect body with your mind,” which is embarrassing. We have no idea what the song means–we picked it because it mentions Jesus in the second verse. 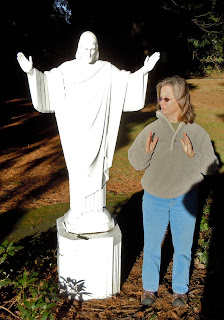 Anyway I liked it better when we stuck with the old liturgy. And that’s using the King James English, which is what God speaks. So the other day when the priest guy said “The Lord be with you,” I went ahead and hollered “and with thy spirit,” while everyone else was going “you too, dude.” That’s when I knew there was no real magic in the Catholic Church. That, and also I didn’t burst into flame.