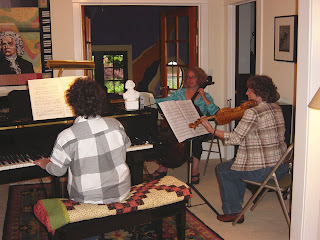 I have a long tendril of music curling around my brain these days, as usual. This one is a Domenico Scarlatti sonata, one of his early ones, and he was an early guy anyway. That means that somewhere in the neighborhood of three hundred fifty years ago, Dom (we have a relationship) dashed off a little ditty and it still lives on in my brain today. Let’s one of us try to pull that off. It’s in there on a loop, a constant undercurrent I can plug into whenever I’m not busy with something else. And it’s living in my brain because it isn’t living in my fingers, yet, but it will soon.

We’ve got a few of the standard modern toys, although fewer than most people. Our TV is acknowledged by all to be little and crappy. But the older I get, the more I want to sit in a room and play all of this old stuff–lots of baroque, but a lot of Brahms and Chopin, too, and some of those guys didn’t make it all that easy. It’s all gorgeous and rewarding and way better than anything I might come up with on my own. And it’s already written down, so instead of having to make a nice painting or sculpture or quilt or piece of writing, all I have to do is plate it up and serve it. If I work hard enough, I can pull that music right through the centuries and induce the sort of rapture other people wring out of religion.

I was born right in the middle of the twentieth century, in a year so bland that literally nothing else happened. Well, Queen Elizabeth figured prominently, and Sir Edmund Hillary, but that was about it. By 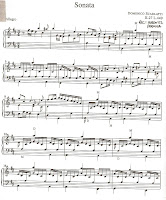 the time the Y2K business was coming around, I was eager to enter a new century, but I sort of had the nineteenth in mind. I wanted to sit and read, sit and paint, sit and sew, putter in the garden, take constitutionals with my swain, and have people over to the parlor for chamber music–only with good lighting and elastic-band pajamas. I’ve resisted cell phones and Blackberries and iPods and the need to be on the communications grid all the time because it makes my head vibrate unpleasantly and makes the Scarlatti tendril hard to hear.

But now I have and enjoy a computer, am on YouTube, have my own blog and a Facebook page and think it’s all pretty swell. I have one foot in the nineteenth century, one foot in the twenty-first century and I don’t know what that is I’ve got hanging over the twentieth.