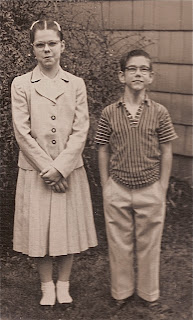 Dave and his sister are two years apart in age, and I used to watch them reconstruct their childhoods like two kids knocking each other’s Tinker Toys down. “Remember when you broke your leg that time you fell off the horse at Uncle Ed’s and cried for three days?” she’ll start out. “That wasn’t my leg, it was your arm, when you tried to hand me a box of hornets when we were camping in Alberta and you tripped over the moose,” Dave will counter, and all the while their mother would stare at them as though they had fallen out of the sky and not out of her. Neither child had ever broken a bone, they’d never been in Canada, and they didn’t have an Uncle Ed. There’s no good anecdotal evidence they ever were in the same place at the same time, and if they didn’t both have such a strong genetic ability to make shit up, you’d never guess they were related.  Still, at least they’re coming up with something. My memory is gauzy at best.

Odd things percolate to the surface from time to time but I have no conviction they ever happened. I tend to remember my humiliations. There were a bunch of years I spent humiliating myself but, in what is no coincidence whatsoever, I’ve blacked most of them out. 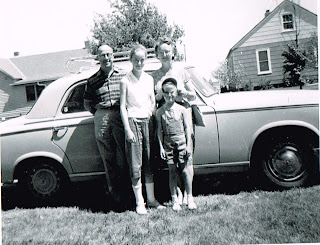 Sometimes I think I remember something because there is a photograph of it. The photo either makes it easier to hold onto a memory, or I’ve concocted a story to go with it. Most of the things I remember aren’t very important. We might have gone on a terrific vacation and seen monuments and waterfalls and splendors, but all I recall is watching Daddy strap an oiled tarpaulin over the suitcases on the roof rack of the Peugeot. Or I’ll remember the knotty-pine interior of the motel rooms, where he always insisted on testing the mattress for firmness before shelling out the $14, but never rejected a room. Or the gift shops with the postcards of chipmunks, the critters made out of pine cones, and the itty bitty birch bark canoes. I have one photo of a day I do remember. I had found a feather and a headband and I belted my raincoat tight and crept around the landscape. I was certain that other people in the parking lot thought I was a real Indian because of my plaid raincoat and great stealth.

But if something hops up and down on one of my memory neurons, there’s no telling what’s going to bubble to the surface. That’s because, like many in my generation, for a lot of years I don’t have memories. I have flashbacks. And that’s really pathetic. Flashbacks are memories of things that didn’t even happen. We are each the author of our own life, and I don’t know if mine is fiction or memoir.

In fact, there are about fifteen years there when just about all I can recall is buying the next pitcher and sliding a quarter onto the pool table. Not a lot else comes to mind. Which, come to think of it, is probably a thorough accounting. If I’d had any foresight at all, I would have hung out with sober people so there would be a repository for my memories, even if it had to be in someone else’s brain. But those people didn’t like to hang out with me. 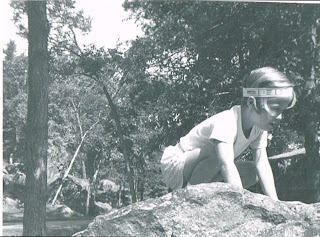 Oliver Sacks discovered that music was entwined intimately with the gooey memory portion of our brains. People who had been catatonic for years came alive and began to dance when the music of their youth was played. Some day my peers and I will be sitting around unresponsive in an institution and a future Dr. Sacks will get a wild hair and blast out “Gimme Shelter” from the sound system. We’ll all dance, all right, but we weren’t in the Cotillion set. The good doctor will think we are having a seizure.