It’s not the evidence of gang activity per se. It’s the noise and the disruption, especially in the middle of the night, in the city. It’s just rude.

Raccoons don’t care. Procyonid is their proper name, meaning “before the dog.” It’s short for “y’all best broom thet thing off the porch before the dog see it.” Only in Latin.

They seem kind of cute from a distance, but like a lot of other things, they swell up at the sight of a man with unzipped pants. Or so I was informed by Dave, right about the time he lost the habit of peeing out behind the shed. They were large. Lined up a few feet away, none of them qualified for carry-on, and some were getting into duffel territory. He was not able to determine, especially through their masks, if they were curious or malevolent. Or peckish. 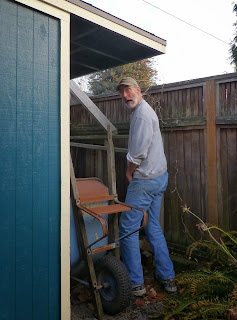 We have a tower on the house from which we can actually look out a window and down on our roof. The first hoedown Dave went up there to put the fear of Dave in them. He flicked on the light and charged the window making boogah boogah noises. Eight pairs of eyes edged up close. Hey, it’s Zipper Man, they said, and giggled, and settled in to watch the window like it was America’s Got Talent. My husband is a good-sized man but, as I have had to report to him on other occasions, there is no such thing as a Fear Of Dave. Not really.

There isn’t a huge danger in having raccoons. They can carry rabies, but at least they wash it first. One problem is they can settle into your attic or crawl space. If you do have raccoons in your attic, word is you can repel them by tossing in tennis balls soaked in ammonia. Or you can put in a radio dialed to a talk station. I know just the talk radio host that would be particularly repellent, but resorting to that would be like clearing ants out of your house with time-release napalm. 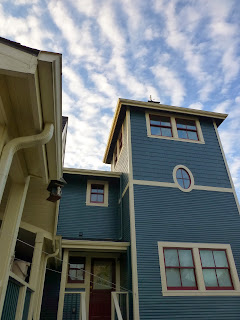 They were pretty matter-of-fact about this sort of thing in the old days; I have a photo of my Uncle Cliff in a fine raccoon coat, which implied a certain amount of violence. And the original Joy Of Cooking featured a recipe for raccoon. Today, I’m at a loss. The other night they were going to town up there on the roof, and giggling, and I thundered up to the tower to see what could be done. Eight pairs of eyes turned my way. I didn’t end up doing anything. I think the big one with the accordion threw me off, and I sure didn’t want to do anything to get the group with the cowbells going. The mature thing to do, when you can’t change something else, is to change your attitude. To look on the bright side.

Eight trillion bits of information on the internet and you can’t find one search engine to tell you what the insulation R-value of raccoon poop is.