As an Oregonian, I tend to think my state stacks up favorably when compared with the other states, but I did suffer a flicker of envy the other day when I read about Arizona. A giant haboob just flew through there at speeds up to sixty miles per hour, and all we have is elk.

A haboob is a massive dust storm, and Arizona has a lot of them, although of course this one was a real dilly. Floods, tornadoes, hurricanes and haboobs alike have been overachieving for years now in spite of the sober judgment of dozens of prominent capitalists that there is nothing untoward happening with our climate. So it’s a puzzler.

Myself, I put it down to the trend towards obsessive housecleaning. I am not trendy. My preference is to fail to notice dust in the house, which is easier if you don’t disturb it and avoid sunbeams, which are rare here anyway. Over time, all surfaces develop a pleasing matte finish, and periodically–say, once a year or so–the whole accumulation can be neatly rolled up like felt. This is not the method preferred by my housemate, who suffers from higher standards. With his method there’s never any end to it; you’ll never quite get rid of the schmutz in the corners; and you can’t tell where the cat has been. 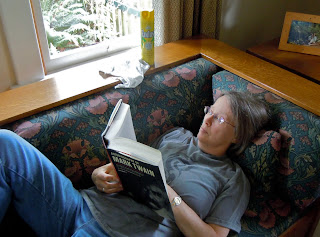 A huge component of house dust is shed skin cells, which pop off the body and onto the coffee table in the hundreds of thousands per day, like an epidermal diaspora. The cosmetics industry has so far ignored the potential of a mixture of dead skin cells and Lemon Pledge as a suitable face spackle, but not for lack of a market. Somebody would buy it. In fact there are no doubt some individuals who are embracing the unparalleled exfoliating properties of a good haboob. If you should see someone standing out naked when the haboobs roll through, he’s probably the sort who’s already carved away his own nose and injected himself with botulism. You can draw your own conclusions, although none of them support evolution. 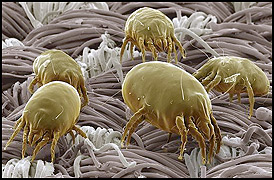 Thanks to the proliferation of well-advertised dusting products, people are waging war on dust in the modern era, many of them claiming allergies. Dust allergies, they say, are really allergies to dust mites, which are organisms that like to eat our skin cells and, like tiny polite vultures, are kind enough to wait for them to die and fall off of us. In fact, though, no one is strictly allergic to dust mites, which are actually too large to become airborne where we can inhale them. Instead, they are allergic to dust mite poop. If you were looking for another sort of factoid, you should have visited a different blog.

My own mother was a regular duster. She devoted one day a week to it and was probably glad to do it. Once a week with the bottle of O’Cedar was a cakewalk compared to the Dust Bowl, when the entire state of North Dakota, among others, lost its skin cells. She relates that they had to sweep out the entire house three times a day, with a shovel, due to the local shortage of backhoes. What roiled through the air was valuable stuff, stuff you could grow wheat in if you had a little water, but if you had a little water it wouldn’t have roiled through the air. From what I gather, North Dakota may have been flat, but it had really big haboobs, although Mom never put it that way. 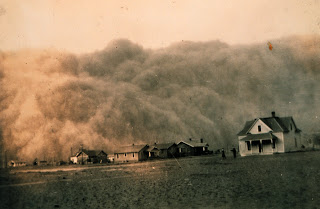 So it may have been her early experience that made my mom such a good housekeeper; I certainly have no evidence at hand that there was a genetic component. It would be interesting to see just how long I could go without dusting, if Dave weren’t around to inflict tidiness. There is something comforting about the thought of watching the house fill up with my own skin. That might not spin your propeller, but it’s about as close as we apatheists get to immortality. Maybe I could live long enough to see it wrinkle on the bookshelf. Maybe I could grow wheat.