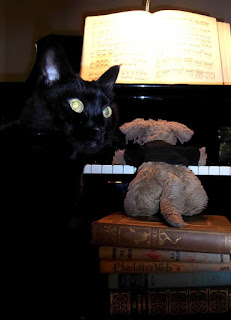 It used to be a marketing ploy. Now it’s just a description of my short-term memory in the shower.

This business of having a clean brain slate every day requires some workarounds, but it has its advantages, too.

For instance, it’s great to be able to listen to good music with fresh ears. Unless something has been played to death, and then had its corpse hacked up and crushed into powder and packed into your ear–I’m looking at you, Vivaldi’s Four Seasons–I’m probably listening with fresh ears. Sometimes I hear some wonderful piano music on the radio and think: I like that. That sounds vaguely familiar. I go rummaging through my sheet music to find it and learn it. I begin to plink it out and after a day or two I notice there are already some fingerings on the page, in my handwriting, and then I realize it sounds vaguely familiar because I spent three months learning it. Last year.


Three months is about average for me. Our performance group meets that often. I have a routine: 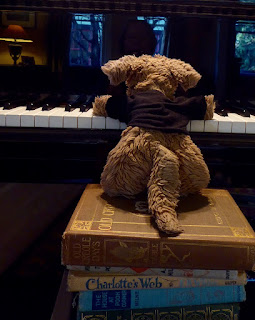 First I bushwhack through the piece to get an idea what I’m in for. Okay, okay, this part is easy, this part is not so easy but at least it repeats, this part is totally doable unless I’m planning to get it up to speed, and this little climax thingy here is not actually possible at all but I can take a good stab at it and see if it dies outright or goes limping off long enough to get me to the coda. It’s all pretty exciting and I give it a good whirl for about a week and a half, and then something in my internal clock reminds me that I don’t need to have this sucker done for another two months. I could do something else for a while. An art project or something. I won’t, but I could.

About a month away from the performance, I pick it up again and do a serious slog. Currently, for instance, I’m working on a Beethoven sonata with a bunch of variations. I don’t know how many because I’m not planning to learn them all. Just like with my beer drinking, I figure I can stop at any time. The tempos vary. They start out Andante, as God intended. The next is somewhat challenging but there’s no tempo indicated; I trot on over to Youtube to find a recording. Can we hope for Andante again? Moderato maybe? Oh, looky there, it’s Molto Bat Out Of Hell. Thankfully the next is a dirge; I can play it with one hand on a casket rail. Then things deteriorate in a hurry. Vivace, Liberace, Whoop Whoop and Whoa Nelly, followed by The Horse Is Out Of The Barn. 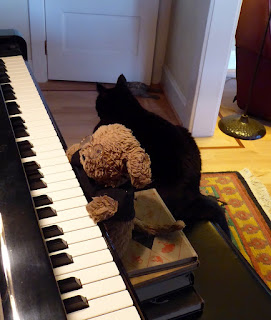 Now there are two weeks to go and things are starting to snap together nicely. If I take it slow and hammer at the tougher passages, this mofo is going to be in peak condition by performance time. Oh look! Crayons!

The day before the event, I practice the tough parts ten times a day with time off in between to let my fingers think about what they’ve done. The day of the event I’m at it all day long. Just at the time I’m about to find my coat and go out the door, and not a minute earlier, I have the whole piece together such that if absolutely nothing goes wrong and I’m not even a little bit nervous, it will all be fine. Just fine. Over-rehearsing is for sissies who are afraid of failure. And professionals.

I go. I play. I either crash and burn or get away with a minor singeing. There’s wine. Later, I’m inspired. I leaf through my sheet music to find something for next time. It’s in three months. In three months I will not only have forgotten how to play what I just played, but I won’t remember what it was. I am serious. Last performance event I had to ask someone else what I’d played the time before. She knew, too. She looked up and to the left, into the sealed vault of her wonderful mind, and said “I think it was the Chopin Etude in A-flat major.”

How does that one go, I didn’t say.

I don’t know what the rest of you do with all that clutter in your brains, but I keep things spotless over here. Even my ears are fresh. Lather, rinse, repeat.