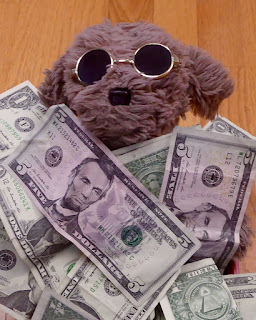 Can we talk about money?

By now you’ve probably heard that most of today’s money is in only a few pockets. Not that many at all. And the rest of us, well–some of us are doing okay, but a whole lot are barely scraping by. There were always rich people but not like this. And they’re really not kicking in the taxes so much anymore. They’re leaving that part of the social contract to us.

I understand how we got into this predicament–the system is rigged twelve ways to Hallelujah–but what I don’t understand is how the rich people got the poor people on their side. So many people wish they were rich that they actually admire rich people, no matter what. There’s something about obscene wealth that makes people think: oh, they totally earned that. Why? They must have, because they have it. We really don’t ask for much more proof than that.

Speaking of the Queen–we’re the same way with royals. They get poop stains in their drawers like everybody else but we think they’re special because of the crown. They’ve got the kit, they’ve got the outfit.  Of course, your own daughter wears that stupid princess costume and you might drop her a curtsey once or twice just to play along, but you still expect the sequined little pinkster to do the dishes and clean up her room. We all have responsibilities. You shouldn’t be able to get out of them by waving a scepter around.

We teach our sons and daughters to share. Rich people, though, are to be admired and commended for  accumulating just as much as they can, and keeping it to themselves. They shouldn’t have to pony up much for the good of society–that’s commie talk. “I might be rich some day,” ordinary folks say, “and I won’t want my loot taken away, either.”

Even the crappiest widget-maker on the line thinks she works harder than her coworkers. It’s easy to talk her out of the union; easy to get her to believe her poker prowess will set her up prettier than a dull, plodding old pension plan. It’s a snap to get her to hand over her money to a newly liberated financial sector, operating under newly minimal oversight. So a lot of our richest people siphoned off middle-class cash into opaque financial instruments constructed of pure bullshit. They won the big score, and now they’re set. It’s quite the caper they pulled off.

But aren’t rich people the job creators? Shouldn’t we leave them alone so they don’t get in a snit and quit making us jobs?


Hmm. Let’s see. Some of the most successful players got that way by doing the exact opposite of creating jobs. They arranged acquisitions and mergers and destroyed companies and unions and (by the way) lives.

One of the steamiest piles of money originated through the hard work of a single entrepreneur named Sam Walton, who may ultimately have done more than anyone else to destroy the middle class. He created plenty of jobs, but they weren’t in this country. And three of the top twenty richest Americans got on the list by cleverly also being Waltons, and for no other reason. They made shrewd sperm selections. That’s earning it, all right.

You know who the job creators are? You and I are, if we are so fortunate to have just enough money to buy a haircut, and a latte, and a book, and dinner out. Doesn’t need to be a lot of money, either, just enough that we feel comfortable swapping our dollars around. We don’t have to be rich to be rich enough.

But wait–how about Jeff Bezos, and Bill Gates, and Mark Zuckerberg, and that gang? Didn’t they invent things and develop things and earn their money?


Well paint me red and call me Natasha, but I’m saying no. Not all of it. Maybe the first half billion. Maybe two billion. Draw the line wherever you like, but there’s a number out there it is not possible to be worth. Not really. You get to that number, scoop it on up and enjoy your life. Put it in the win column. We’re confiscating the rest. 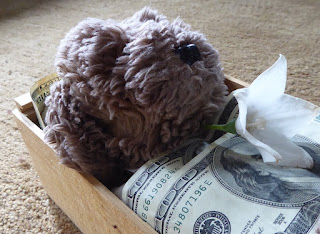 Bill Gates and Warren Buffett know this. That’s why they started The Giving Pledge, promising to give away at least half of their fortunes. It’s a start, and it still leaves them plenty of walking-around money. Plus, they’ll even let you wait to give it away when you’re dead. But for most of these luminaries on the Forbes list, the thought of scraping by on a half a crap-ton of money is a real scrotum-shrinker. Right now they’re sitting pretty. They’ve got nothing left to worry about but their souls, and the consensus is that can wait a bit.

How can anybody acquainted with his own mortality hoard so much treasure in good conscience? And if he in fact does not have a sense of his own mortality, is there anything we can do to drive it home?

Don’t make us get our pitchforks.