Why would a girl from Portland, Oregon go all the way to Maine to see a meteor shower? It’s a reasonable question. Why not North Dakota? 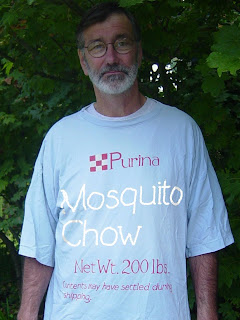 Dave (“Mosquito Feast”) hadn’t had a good case of West Nile fever since our last trip to Maine, so he was rarin’ to go. Walter and Linder had arranged for a bunch of us to spend a week in a magnificent house on the coast, where we had mid-Augusted before. (Retired union folk on a fixed income don’t “summer,” but that’s okay.) It’s a loon-laden and ospreyed-over locale, and beautiful, and would be plenty quiet if it weren’t for the loons. This is not a complaint.

The only rule at the Punch Bowl on the Eggemoggin Reach is to do what you really want to do, as long as you wouldn’t be doing it otherwise, and a 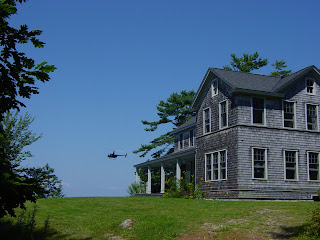 big help in this regard is that the place is unmolested by the Internet. That gains everyone a few new hours a day right there. First there’s the sleeping-in competition. Linder always loses; she claims she never dreams, so she has to settle for watching the real sun rise over the water instead, followed by a few hours’ communion with an eagle or a seal, while swatting hummingbirds away from her left ear (honey, what’s in there?). Then the rest of the crew comes to and tucks into breakfast (leftover cake and ice cream). Someone always steps up to make something deadly for dinner, and the rest of the day is spent as we wish.

We became accustomed to the local soundscape: the chirruping of the ospre 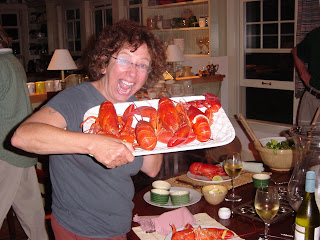 Monday (lobster night!) many of us spent the day in the Punch Bowl, the shallow little inlet where the water hits the hot sand at high tide and warms up like any other bathtub full of starfish and barnacles. Tuesday (crabcakes) Linder was gracious enough to give watercolor lessons to all interested parties, even though she does that for a living. I brought a box of pastels instead and indulged in hours of painting en plein air, which is French for “under the pooping birds.” This is also how Jackson Pollock got his start. Bruce, Elizabeth, Walter, 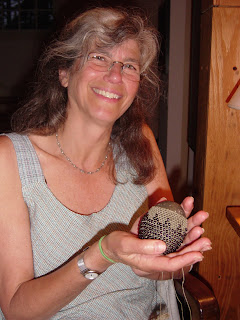 and Donna continued their efforts in watercolor Wednesday (lobster night!) and Thursday (sauteed shrimp). Dickie gathered items off the forest floor and made a table out of them. Jeannine trolled the house for feet to oil up and rub. Elizabeth devoted her days to fashioning fabulous and slimming bead jackets for stones. Stones, she explained, are modest. Mornings, she exercised on a yoga mat, knees clasped, rocking gently back and forth, back and forth, echoing the ambient sound of the waves slapping and farting against the shore.

Maine has been rainy and cool, alternating with cool and rainy, all summer. So we hauled in some of that fine sunny weather Oregon has been known for since the Republicans bollixed up the climate. You’re welcome, Maine–it was nothing. We’ve had a surplus. We also checked out the forecast for the meteor showers. They were expected to peak on Wednesday. Wednesday afternoon. No sunglasses are that good, so we crawled up to the roof at night with nothing over us but the whole Milky Way and a thin blanket. The meteors, being stones, were modest. Dav

e, swaddled in mosquitoes, attracted a giant diving bat. This sort of thing no longer surprises me.

Dave and I kayaked for loons. Your standard loon, natty in vest and tie by Frank Lloyd Wright, is un-harrassable as a matter of personal policy: he will dive when approached, popping back up in the next zip code with a bellyful of anchovies. But on our last visit a loon putzed around u 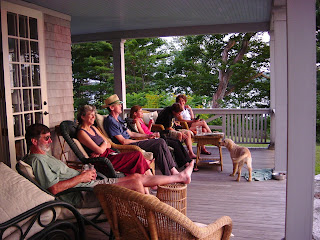 s just a few webbed feet away, diving under our boats, and Dave watched him so ardently that he tipped right over. It’s all about context: same heinie one might see any given morning getting a good scratch in the bathroom is a far more glorious thing when it’s heading into the drink in pursuit of a loon. The loon thought it was funny, too. He told all his friends about it, all night long.

The only mandatory event at the Punch Bowl is the daily Watching Of The Sunset, convened on the capacious west porch. The sun is toasted with wine and spirits, everyone seated in a comfy chair, Dave standing off to the side, dimly visible inside a cloak of mosquitoes. On Friday (lobster night!) we took in our last sunset, Dave’s new West Nile belly rash glowing rosy in the fading light. 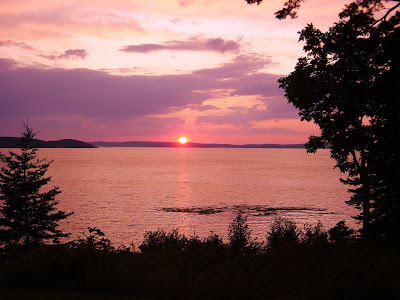