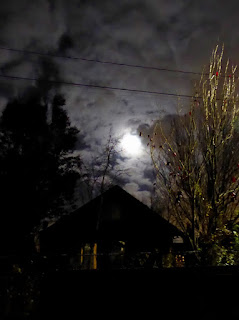 There was a Supermoon last Monday–so they say. There are all sorts of moons out there. Every time we get a full moon, which I’ve noticed is happening with regularity these days, it comes with its own name, pedigree, and warning label. Be sure to look at the rare and mysterious Malware Moon tonight! It will be rising in the east at 6:25pm, in apoplexy with Mars and Jupiter in its bilious phase, and we won’t see that again for 1,425 years! So you trot outside to give it appropriate tribute, but it still looks about the same.

I grew up hearing about the Harvest Moon and the Blue Moon and the Paper Moon, but there are a lot more choices available now, thanks to the need for Content on the social media. And many of your standard moons are also known by more than one name. Here in western Oregon, for example, the Harvest Moon is also known as the Last Moon Before Next July.

A lot of the names were just sensible. They weren’t named for any powers residing in the moon itself, but things that were liable to be going on when they showed up, in a natural order. So, in Indian lore, there’s a Wolf Moon and a Snow Moon and a Worm Moon (it’s a big deal when the worms show up), and also a Buck and a Beaver moon, which should be separated by a few months if we know what’s good for us.

The Blue Moon we keep hearing about things happening once in? That ain’t much. We have more full moons than we have months because of the obstinate refusal of the moon’s revolution around us to coincide neatly with our revolution around the sun, and so every so often we have what appears to be an extra in the calendar, even though it’s more of a calendar issue than a lunar issue. They’re not that rare. Every two or three years we’re going to get a blue moon, and then all those things that don’t happen very often can go off all at once.

Supermoons are another kind of moon. That’s when the full moon looks bigger because it’s at or near its perigree, the point at which it is closest to us. This will affect tides and other things. For instance, it is contended that fishing is particularly bad when the moon is at its perigee. It is unknown whether the moon’s looming proximity makes fish less peckish or more suspicious.

Astrologists are very opinionated about the moon. They base their interpretations on a single overriding principle: everything is always about us. For instance, they say the phase of the moon when we are born has a tremendous effect on us throughout life. (I hope it was waning when I was born, or even a little thundewy.)

There’s also a Black Moon, which, according to Wiccan lore, is the second of two new moons that appear in one calendar month. There’s good magic to be had then, due to the fact that you can’t even see a new moon most of the time, which makes it already sneaky, and when you get two in one month, you’re really not expecting the second one, so you can get away with all kinds of stuff. This is not the same thing the astrologers refer to as the Black Moon. They’re talking about the full moon at its furthest point from Earth (“perimenopause”). Their other name for it is “Lilith.” The rest of the time it just goes by “Petunia.”

The moon is full everywhere on Earth on the same day, but fortunately half of us are asleep at the time. If all the women of the world got their periods and were awake at the same time, things would be run a lot different around here, Bucko.