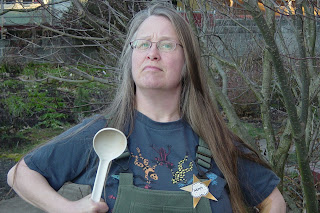 I don’t know what you all did Tuesday morning, but I got up and went outside in a 33-degree mixture of snow and rain to stand in a swamp up to my navel and sample salamander eggs with a spoon. The precipitation was vintage Portland: first it clumps on your hat, then slides down your neck. Yes indeedy, so far, retirement is everything I ever dreamed of. There were about a dozen of us at this party, and we were being trained to be Amphibian Egg Mass Monitors for the regional government entity. They didn’t bring the spoons this time, and we didn’t get Egg Mass Monitor badges, but they did provide chest waders. These were all flung willy-nilly onto a tarp for us to pick out; it looked like a massacre. There were the standard rubber jobs such as a first mate on a salmon boat might wear, and there were also slick new neoprene models. I tried those.

It takes about ten minutes to shovel yourself into neoprene chest waders, especially without lubrication. They are quite slimming, when worn by a slim person such as our trainer, Jean Lea. Otherwise, they make you look like the love child of the Michelin Man. It is no cakewalk to pull them all the way up. It’s like stuffing melons into a garden hose. You really need a tool. I have a new item in mind: it would look something like a thin tractor seat on a handle. I’m calling it a Heinie Horn. But the neoprene is toasty and dry, and might just protect against sexually transmitted diseases as well.

The idea is to survey a section of wetland in a measured pattern to determine how many egg masses have been laid. We’re just looking for red-legged frog eggs and northwestern salamander eggs, because they’re huge and bulbous and easy to spot. A few other kinds of amphibians will have made some deposits as well, but their contributions look like something you might hawk up in the morning, and for our purposes we can ignore them.

Light conditions and turbidity affect our ability to peer through the murky depths, but on this day we also had a veneer of ice to contend with. However, it was no match for my trifocals and my zeal. I found one phlegm ball a foot deep, the output of a long-toed salamander. It didn’t stand a chance–I’ve got skills. My daddy used to take me out to the swampy patches during spotted salamander mating season (this was even before Nintendo), and he’d take notes and photographs while I scavenged. Some people have been primed for a career in medicine from an early age; I was groomed for an unpaid position in hip-deep muck, like a lot of other people in this economy. Daddy would be a hundred by now, and he would have been so proud his youngest finally made something of herself.

The spoons supposedly make it easier to see and identify the egg masses, and we’ll get our own spoon and stopwatch and a map to our own personal patch of swamp in a week or so. I’m still hoping for a badge, too.

Wearing waders reminded me of steelhead fishing. Steelhead are a mythical fish said to roam the cold waters hereabouts, but you never actually catch one, even wearing the good waders. Likewise, we found none of our target egg masses this morning. We’re just a little early; the amphibians in question are holding off on a night of romance in the kind of temperatures we humans were willing to go out to look for them in. This just goes to show that evolution isn’t always all it’s cracked up to be. It’s something to think about the next time you hear someone explain that we need to care about the health of the amphibian populations because they are indicator species, and their fate portends our own. No.

We care about the amphibian populations because they are worthy and handsome and noble of eye and spirit, and a credit to the planet. Really, the hell with us.