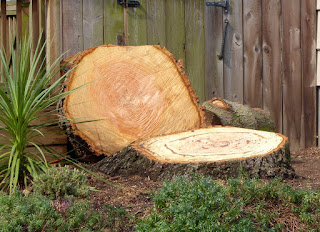 A Northeast Portland neighborhood was shaken the other day by the catastrophic loss of a Douglas fir tree, cut down in its prime.

The deed was undertaken with deadly efficiency by a hit squad of three young men who had clearly done this sort of thing before; not a branch was seen to hit the crappy house of the crappy homeowner who hired them, who got away scot-free, except for abrasions to his soul. 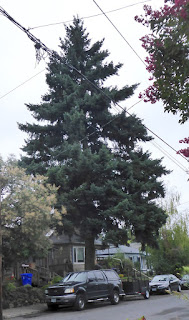 Not much is known about the perpetrator. Neighbors report that he kept to himself, but not quite as much as they’d like. He has a fondness for two-stroke engines and noise, an enormous truck, and a small wiener, probably climaxed a minute into the sound of the chainsaw, and is widely rumored to be a Republican.

Penthouse resident Chucklehead the Crow reports she had just returned from her nightly roost downtown to discover her home being reduced to toothpicks. Chucklehead is a particularly valued member of the community, entertaining nearly everybody with her unusual musical stylings. She has raised numerous children in that location, and had planned on doing so for several more years.

This tree was approximately forty years old and started out as a Christmas tree before aspiring to greater heights and was by all accounts healthy at the time it was murdered. Motivation for the crime is unclear, although one neighbor had complained about the shade, and another groused about needles in the gutters. 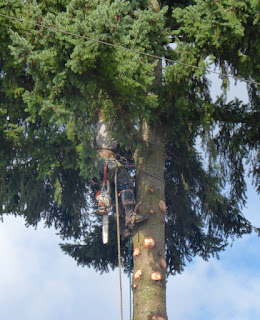 Songbirds up and down the block remember the victim as a tremendous source of seed-filled cones and abundant insect fare. “I remember getting some nice sap from that tree,” says local nuthatch Lonesome Larry, “with which I smeared up the entrance to my nest box to protect my wife and kids. It was real good stuff,” he went on, lamenting that it was not his fault his wife got stuck in it and nearly lost a foot. Two downy woodpeckers have threatened to peck someone’s eyes out and local crows are planning a massive shit attack as soon as blame can be assigned. Scrub jays were philosophical, noting that they can hang out pretty much anywhere and bash pretty much anyone’s head in, pretty much anytime they like.

The ubiquitous Eastern Gray Squirrel immigrant population, though indubitably harmed, has been given no legal standing in the case, and nobody really cares what they think. 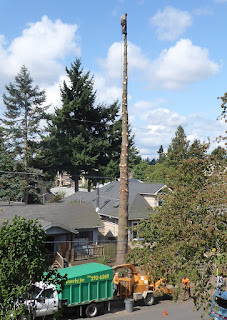 “I’m appalled, of course,” said neighbor Murr Brewster, to whom we are indebted for the photographs. Unfortunately, Ms. Brewster felt she was not able to intervene because she is small and also she had recently taken down a 15-year-old scarlet oak in her own yard, even though, as she explains, it was a shitty bird tree that nobody would even perch in, it had hardly any leaves at all if you looked at it right, and was replaced by five native vine maples. The murder suspect in the case of the Douglas fir is expected to replace his tree with a new big-ass truck, a smelly leaf-blower, and maybe a bigger-ass TV.

The mood was somber except for several tons of local carbon that danced and sang “Free at last, free at last, thank God almighty we’re free at last,” but that kind of thing goes on all night long, and the community has largely become used to the disruption.