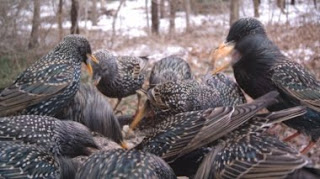 I guess we’re not supposed to like starlings, because they are an introduced species that has edged out the natives and caused a lot of destruction, like white people. Some fellow brought a bunch to Central Park in New York City in 1890, because he had the romantic notion that he would introduce all the critters mentioned in Shakespeare to America. America would have been so much better off if he’d just fired off a check to the local theater company, but that’s show business. He was not entirely successful in his efforts, or we’d be seeing a lot more fairies around here. I guess we should be grateful he was not a Mary Shelley fan.

But I like starlings, and not just because a group of them is called a murmuration. They’re natty, interesting and have great voices. It’s not cool to say it, but some white people are, too.
A good murmuration is something to see. It’s always great to watch a flock of birds wheel and turn in unison, and by the time starlings gang up in the range of a kabillion or so, they put on quite the show. They bloom and squirt and pop across the sky like the innards of God’s lava lamp. It doesn’t seem possible that they don’t run into each other, at least a few of them, but they are as well coordinated as if they were a single organism. 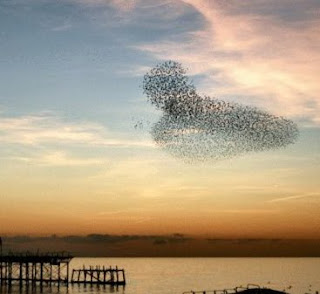 I do know why they don’t run into each other. It’s because they haven’t yet assembled at their annual holiday party. That convenes on a single day in December, right here in our yard. They all know when it is; a raft of them will sit up on the neighbor’s roof, and another flotilla will land on our roof, and a third batch will take over the big cedar, and they sit there for a while checking each other out. This is because they don’t have the technology to send an E-vite, which would allow them to decide if it was worth their while going, depending on who else had signed up. Instead, they have to occupy the roofs and trees and work it out for themselves.
Then, though, they all fly over to our grape vine in a huge mass and the party begins. We don’t harvest our grapes, and by this time they have begun to ferment on the vine. The starlings begin to chatter and chirp, and whistle and click, and hang around the punch bowl, each one wearing a spangly holiday sweater. After a bit, the whistling and clicking gets louder and louder, and restraint is thrown to the winds. Things are said that probably shouldn’t be said. “I heard Frank and Irma over there talking about stealing a new nest box.” “No, you di’n’t!” Whistley whistley,clickety clickety. Jerry “Second-Brood” Calhoun does his siren imitation, Babs lets out a shriek, and Connie starts in on that crazy laugh that sounds like a horse going off. 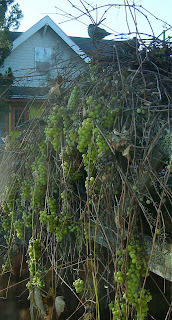 Things really begin to go off the rails then. They pair up and head to the corners of the trellis, trying to sit on each other’s laps, forgetting, in their gaiety, that they do not have laps. Then they pitch over and fall into the garden in bunches. The neighborhood cats find this behavior so alarming that they stay well away, heads carefully turned aside, licking their paws in nervousness.