A Month In IKEA 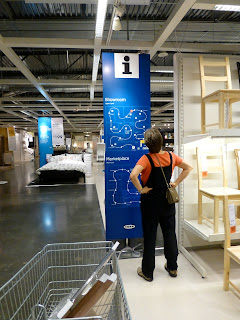 My colds all follow the same script. There is the inciting throat tickle; the sore throat and fever; then the march of the phlegm brigade; sneezing and congestion; and finally, a dry hacking cough for a day or two, and we’re done. A week, tops. The dry cough is the worst. Nothing alleviates it, although there is medicine that will transform it into a dry, mentholated cough.

So when I got my inciting throat tickle in the airport in Fiji on January 20th, I thought: well, at least I’ll be done with this before I give a reading of Trousering Your Weasel at the bookstore. And judging from the crush of humanity and humidity in the Fiji airport, I should be grateful it’s not Ebola. People who are not me love that kind of heat, but I associate it with lying wretched on the linoleum floor in front of the black oscillating fan in August in Washington, D.C. in 1960, and other tropical diseases.

My throat did get sore, but that misery was eclipsed by the fact that my ears sealed up on the airplane and never flopped back open again.

After two weeks, they still hadn’t. “Have you tried yawning?” people inquired, one after the other. No! Really? I am nearly sixty and I’ve never heard of the yawning trick, you annoying shit. Young mothers steered their children away from me as I walked down the street repeatedly gaping like a carp and yanking on my earlobes. I still didn’t have congestion. Then, all out of order, came the dry, hacking cough. “I’ve still got three days before my reading,” I thought. “I should be done by then.”

The cough continued unabated, especially when I tried to talk. I quit talking two days before the event in an attempt to rest my throat, a nearly unprecedented phenomenon which left Dave confused as to whether to enjoy it or be worried sick. The dry, hacking cough remained in force for a solid week, with one two-hour break in the middle, during which I had my reading. It was a little miracle, for which I was advised to credit God, who intervened on my behalf because he really wasn’t up to wading into that business in Syria. 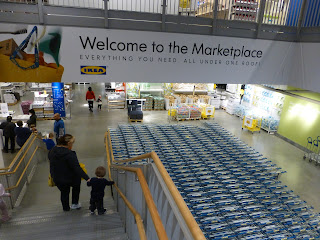 And then the cough subsided, followed by–we are three weeks into this thing now–the beginning of major congestion, which appeared to be having no effect against the invading virus, and so was amplified by a surge of phlegm soldiers, which emptied into my hankie in such quantities that it seemed my head should fold up like a drained juice box. On Day 24, my left ear unclogged for several minutes and then thought better of it. A few days later the mucus quit running but kept accumulating and filled up every available space inside my head like a herd of unemployed twenty-year-olds in a house full of sofas. And then the sneezing began. One after the other. FAGLAVIK! FORHOJA! SNOIG!

That’s when it hit me. OMG. My cold went to IKEA and it can’t get out.


That’s what happened to Dave and me. We went in to IKEA for something specific. Escalators herd you straight upstairs. I didn’t notice at the time, but there are no down escalators. We did maneuvers through office furniture, bookcases, and bathroom furnishings, and finally located our section, selected our item, and tried to make our way back. In IKEA, there is no way back. Retracing your steps requires a sort of reverse peristalsis that their staff is not equipped to clean up after. We were instead directed to the exit by large one-way arrows on the floor aisles, and so we began our odyssey, kinking around the store like farts in a bellyful of intestines. There are no windows. I have a good sense of direction but after four turns I had lost all sense of the exit. “This is ridiculous,” Dave said. “Oh look: picture frames,” I said. We got some traction in the pillow department and gained momentum through glassware, until Dave bogged down at the tumbler display. Linens were next. I could use some new curtains. I pawed through the samples. “There’s a shortcut here, it says,” Dave said, pointing at a sign. We headed that way. 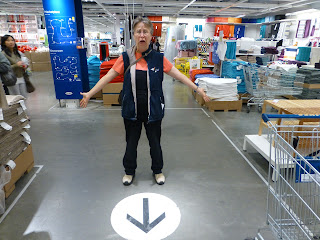 Ten minutes later, I was pleased to see another display of curtains. “Hold up,” I said. “There’s more curtains here.”

“They’re the same ones,” Dave said. Pshaw. I’m the one with the good sense of direction, not him. Holy shit. They WERE the same ones. I was rattled. “Okay, run! Run! And this time, no shortcuts!”

The exit doors finally came into view. They are easy to find. You start at the entrance doors and follow the arrows for forty-five minutes.

I feel sorry for my cold. But enough is enough, I told it. Grab some Swedish meatballs like everyone else and get the hell out of Dodge.